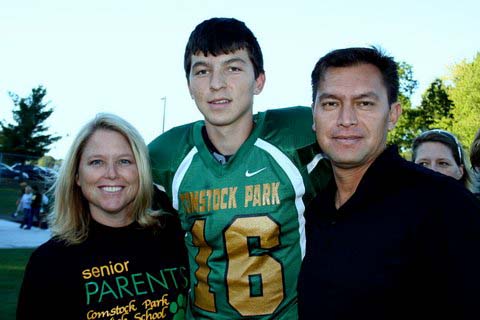 As he waited for an interview to seek congressional nomination to attend the U.S. Naval Academy, Comstock Park High School Senior Miguel Nava, 17, thought about what set him apart from the other 20,000 applicants to the school.

“I couldn’t help but think of my family and how fortunate I am to have such a strong foundation,” Nava recently told about 200 attendees to the Academic Awards and Scholarship Night at the high school.  He was honored for making it into the US Naval Academy, one of the country’s most prestigious secondary schools. He was also accepted to the US Air Force Academy.

In his speech, Nava talked about his father Javier Nava, an immigrant from Mexico who left his home to follow his dream in the United States.

“He was hoping one day just maybe he could live in his own house, with a wife whom he loved, and could sit at the table every night with kids who would have the chance to go to college,” the young Nava said. “I’ve had opportunities that he did not, and he’s never let me forget that.”

During his high school career Nava played soccer and football and mentored younger students all through high school. While he was careful about keeping good grades, teachers said, he was always more interested in learning that getting the perfect GPA, his teachers said.

“What I admire about Miguel is that all through high school he has been most interested in learning,” said high school counselor Gina McCambridge. “He cared about his GPA, but not to the detriment of all other things. He took challenging classes to learn, not to earn an A.”

Agreeing with her was Cindy Chester, an English teacher at the high school, who taught Nava during his junior and senior years.

“I’ve always seen him as a person who wanted to challenge himself, someone who’s always been self-motivated to do his best and to create opportunities for himself.”

“He is a modest person concerning his achievement, and that’s a good quality to have. He’s very honest, loyal, sincere and respectful of his elders,” she added.

Nava said even as a young child, he dreamed of piloting so when he started to look for a college, he set his eyes on the Air Force Academy first, but kept his options open.

“I didn’t want to sell myself short because what if I didn’t get in the Air Force Academy? So I applied for all service academies,“ he said.

He secured congressional nominations for all three academies from US Rep. Justin Amash, R-Cascade Township, and one for the Air Force from US Sen. Carl Levin, D-Mich.

He knew he needed a good ACT just to be considered among thousands of applicants. It took a tutor and taking it three times, but he improved his score dramatically to ensure he surpassed the requirements.

That’s a focus he’s always had, said his mother, Lisa Nava. “Even as a little kid, all the neighbor children would be outside playing and he would be inside, sitting at the table talking to adults. He’s always been more mature for his age,” she said.

Nava said part of that maturity came from visiting his family in Mexico, being immersed in a different culture and understanding the opportunities he had here. “I see it when my grandparents come here. Like last night, when we went to the high school, Comstock Park is not a huge high school but we still get so many opportunities,” Nava said. “That’s why (my dad) he wanted to come here.”

Nava said he was accepted to the Naval Academy Feb. 25, a year after applying. A month later, he was also accepted to the Air Force Academy. “I had a good experience there and created relationships with the coaches and everything,” he said of his visit at the Air Force Academy.  But at the end, the US Navy Academy’s culture, traditions and future opportunities seemed the most suitable to his interests.

As for flying, he started taking private lessons on the east side of the state with a cousin there.

Lisa Nava said as parents, she and husband Javier are excited to see Miguel follow his dreams.  “His dad is so excited. He didn’t care which one he chose but when we took him to the Naval Academy he said ‘if I had to choose, that’s the where I would choose’,” Lisa Nava said. “It’s exciting for him to get to see Miguel doing something that he didn’t do. You don’t want to live through your kids, but it is kind of cool when they have the opportunities and you can see all the doors that it will open in the future.”

Miguel Nava, who will be leaving town for the academy at the end of June, said while he’s excited to go, wear the uniform and get into the routine (which includes 23 credit hours, playing a sport and involvement in an extracurricular activity as required by the Navy), he’ll have to work on getting up on time and on showering in less than a minute. “Managing time will be huge,” he said, a big proud smile on his face.