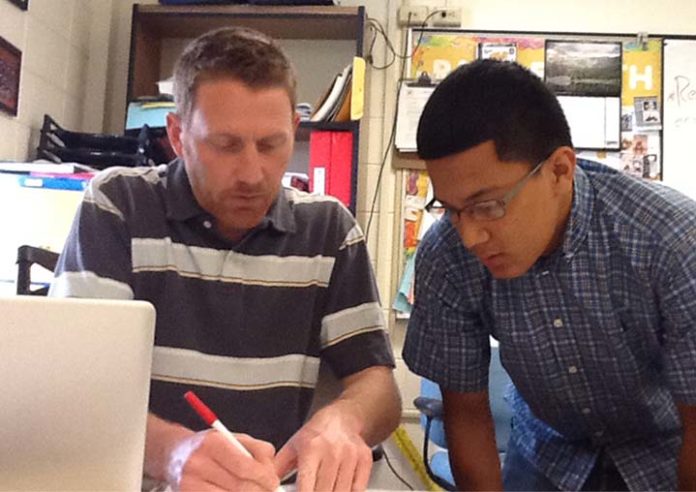 That’s been the recipe for success at Godwin Heights High School since administrators implemented an intervention program that has dramatically reduced the rate of freshmen failures in core classes.

“We are putting a big dent into the failure problem we were having,” said program administrator Chad Conklin adding the program reduced failure on core classes from about 30 percent among freshmen to 8 percent by the end of the first year. And after the program’s summer credit recovery intervention, that failure rate was reduced in half. “It definitely works.”

The program, funded by a two-year, $400,000 grant by the Kellogg Foundation, started in 2011-2012 school year and required a change in the school’s schedule to allow for a seventh hour at the end of the day when freshmen would be able to take online enrichment classes.

But any freshmen receiving a 70 percent or lower in any core class unit test was required to head to intervention, run by a teacher and four additional staff providing specialized support to students.

Students who did not pass a class were required to take summer school intervention. All along, staff are in communication with parents so they’re aware of the academic standing of their students.

“Most of the time if you get a freshman failing a lot (of classes), that student will end up dropping out by their junior year,” said Godwin Heights High School math teacher Mark Holsworth, one of the teachers with the program. “We’re really keeping them on track because freshmen year is so important.”

Make it so failure is not an option

“You have to make it so failure is not an option and that sometimes takes a lot of manpower and diligence from the district to make remediation timely and precise, as opposed to waiting for a student to fail,” Fetterhoff said. “I’m extremely grateful to the Kellogg Foundation that provided us with the funds to be able to increase our level of staffing to support this program.”

Fetterhoff said the positive results of the program by far surpassed their expectations, and hope to see improvements when last year’s freshmen take the Michigan Merit Exam next year. They also hope the effort will result in increased graduation rates.

Conklin said to ensure administrators keep a detailed database so no student has a chance to fall through any cracks. By the end of the first year, failure rates in core classes had been reduced to 8 percent. Those failing were required to attend summer school intervention, which reduced that in half, Conklin said.

The program was so successful it expanded to sophomores this year. Eight more staff were hired thanks to a $125,000 grant from the Steelcase Foundation, along with district At Risk funds, which meant  a total of 12 staff. This allowed administrators to set a goal of no more than 25 percent of sophomores to need summer  intervention.

Squatting by the table between freshmen students Veronica Quiroz and Alexis Lambright, Holsworth, the math teacher, takes his time to explain the students how to solve an algebraic equation.

“You have 18 and 12 so what’s a factor you can use?,” he asks Veronica as he tries to get down the concept of how to solve the equation without giving the answer away. 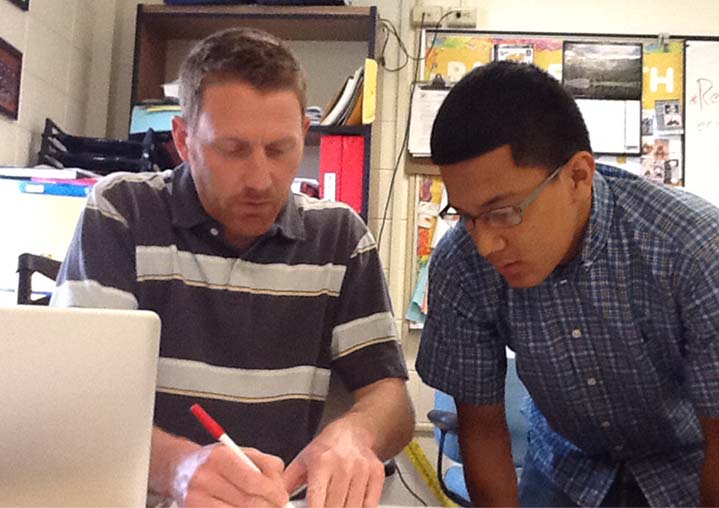 “So what’s another factor you can think of?”

“Perfect, go with six then,” he said. “Very good,” he adds as the student continues solving the equation on her own.

It’s that personalized instruction what she really needed to be successful, Quiroz said.  “I’d rather be here, I don’t concentrate that well in class. I get more help that I need,” she said.

Friend Alexis Lambright agreed.  “I get to ask the questions I don’t get to ask in class. It gives

me the extra push I need to pass this class,” she said.

Agreeing was Conklin, who said many students in the past would fall behind early in their high school years, setting them so far behind that it would be nearly impossible for them to graduate, let alone go to college.
“We decided we simply would not allow our students to fail. We made sure they had all the materials and support they needed so they would pass the class and we gave them every opportunity to pass the class.”

Jesus Lopez said he’s a pretty good student but got so busy that he lost focus at the end of the semester.  “There’s too much to do in classes and this has helped me out so I don’t have to do summer school.”

Eduardo Ramirez agreed. “I’m not good at math and if I don’t have intervention I couldn’t be eligible for sports,” said Ramirez, who is in soccer, track and wrestling.

Conklin said they hope they will continue to receive grants for the program that has been so successful in improving students’ grades, and they expect will reduce drop outs and increase graduation rates.

“We feel our students are better quality of a student, they’re working harder. They understand the expectations of the program and they are better prepared,” he said.

“They know we will not allow them to fail.”

Come on in – finally!