Students Learn the ABCs of Salmon – by Raising Them 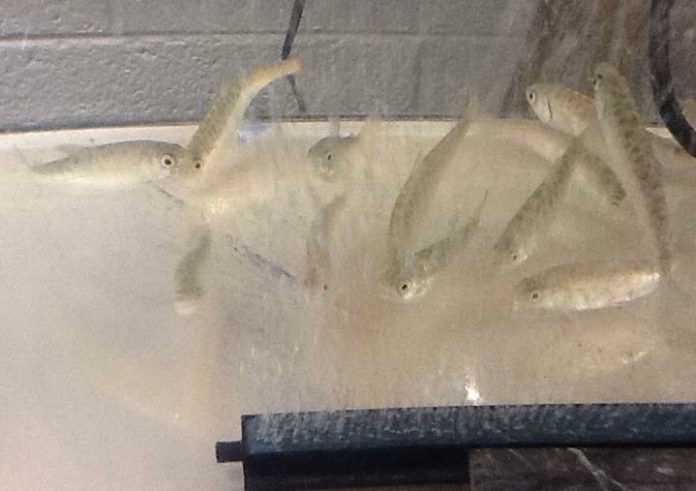 A is for Alevin, a newly hatched salmon. B is for big, as in King Salmon, the largest in its species.

And C is for Chinook Salmon, the specific type of fish Thornapple Kellogg Page Elementary science teacher Curt Wissink and his fifth grade class have been raising since fall and are planning to release into the wild Friday.

The project, part of the state’s Department of Natural Resources “Salmon in the Classroom Program,” allows students to learn about salmon’s lifecycle, the importance of fisheries for the state’s economy and the Great Lakes ecosystems. It also allowed students build their own “Salmon Dictionary” they proudly presented to fellow classmates.

After starting with 200 eggs, the class was to release the 13 surviving young salmon, or smolts, last Friday, but had to postpone the expedition because of the Thornapple River’s high levels.

‘I’ve learned a lot,” said student Colton VanLootenoord. “Each week or so, you have to switch their food. First they eat from their yolk sac and when that’s gone, you have to give them food that just looks like flakes. Then the food gets bigger, like a centimeter bigger every two weeks…. No, no. One millimeter bigger each week. And on Mondays, they don’t even wait (for food to drop). They’re starving because they haven’t eaten in two days.” 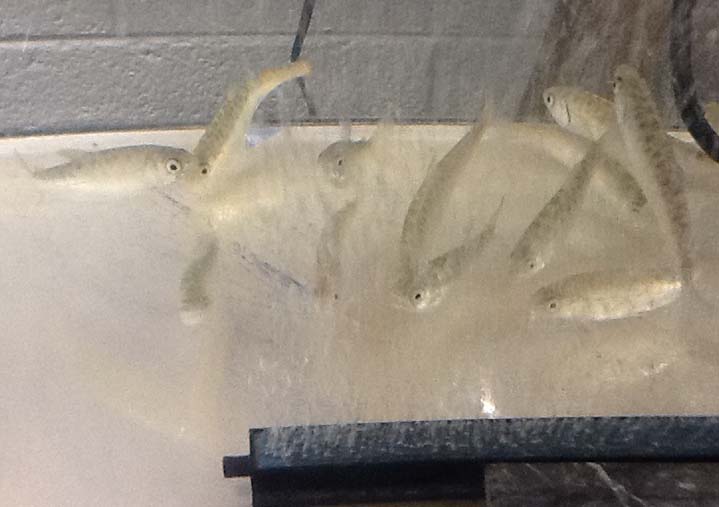 McKayla Buehler said she liked having fish in the classroom.   “It’s really cool to watch how they live their lives,” she said. “You can see their lifecycle in your class. That’s kind of fun. And they have a better chance of survival here than they would have in the wild.”

Anna Timm agreed, saying she learned about the eggs, (“they’re bright red”), and that when they have lost the yolk sac, they have to be fed, (“they’re called a fry”). Most importantly, she said, she’s been able to care for the fish.

Not that it’s her first time around, since she’s tried it before. She said at home, she has cats, a dog and a bird. So trying to raise fish there was a bit more challenging.

“The hard part is trying to keep the cats away. Once, I came in my room and all the stuff was all over the place, and I’m like, where are the fish?”  She said. “Here, you just have to make sure to feed them and clean the water.”

Unless there is an unexpected problem, added Colton.  “There was a problem with a pipe and the temperature got too high. It’s supposed to be like 54-55 degrees and it got to 75 so a lot of them died,” he explained. “It’s really important to maintain the water temperature.”

Wissink said he read about the program in a newspaper article and thought it sounded like a great experience. This is the second year he’s using the program in his classroom. “This gives kids hands-on experience on Great Lakes, fishery and the problems we face with invasive species,” said Wissink. “They get to explore different things as scientists and excite them about the outdoors. It’s real science for the kids that they can apply to their lives and also learn to be good stewards of the land and of our state.

Natalie Elkins, a DNR education specialist who oversees the program for the department, agreed. “Salmon in the Classroom teaches students about everything – from the life history of fish to the importance of the Great Lakes and fishing to Michigan’s traditions and way of life,” said Elkins in a news release.

“(It) ties right back to the kids’ communities. Students get invested in and excited about their local rivers and streams, knowing that the smolts they released will return to the very same spot in two to three years to spawn,” said Elkins.

“That connection encourages a long-standing appreciation for Michigan’s natural resources and ecosystem health.”

This year, 180 schools participated in the DNR program. To be accepted, teachers must commit to teaching students about the Great Lakes ecosystem and fisheries management.

The cost of the program is $1,200. Trout Unlimited provided the eggs and the program was sponsored by Schrems TU, which has partnered with MDNR for the past six years to offer the program in West Michigan said J.R. Hartman, Schrems West Michigan TU President. They currently sponsor nine schools in the area.

“We are extremely grateful to Schrems TU for sponsoring our class,” Wissink said. “This has been a great hands-on learning project for the kids to learn about the Great Lakes ecosystem, aquatic invasive species, and fisheries management.”

To watch a video explaining the program click here