Students Pace Themselves at the Learning Center 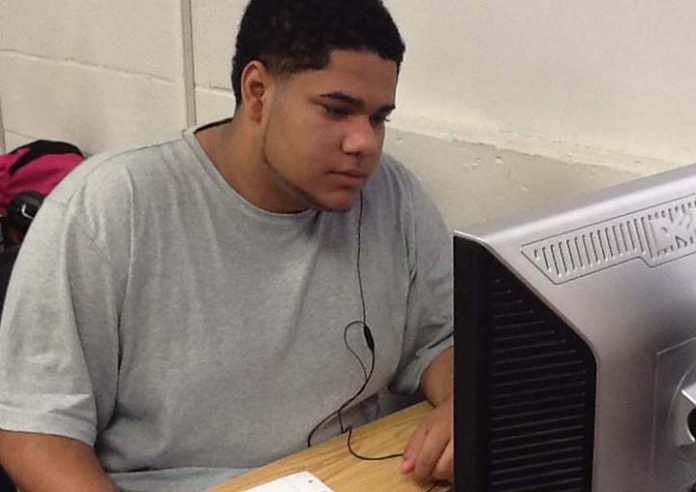 Andy Cruz, 17, of Grand Rapids, knows perfectly well how his first year in high school set him behind schedule to graduate. “I took my freshmen year as a joke. I hardly came to school. I wouldn’t do my homework. I just wouldn’t show up,” said Cruz adding that, fed up, his mom sent him to live with his father and change schools.

“It is a different environment, I didn’t know nobody. So I might as well do my work. That’s when I started picking up my grades,” said Cruz earlier this month. All the hard work paid off.

Cruz was among 36 students who last week graduated from the Learning Center, Godwin Heights alternative education program. Now, Cruz is looking forward to the next step: becoming the first member of his family to go to college. “I’ll go to college and study business and then I’ll come back and set up my own business,” said Cruz adding the Learning Center was exactly what he needed. “It was good for me. It got me caught up.”

That’s exactly the idea of the program, said principal Chad Tolson, adding students enrolled in the program take online classes and have the support of one teacher and three interventionists. About 100 students enrolled in the program this semester. “It works well for some students because you work at your own pace. A lot of times the students are behind schedule to graduate. They can accelerate their ability to earn credits to graduate,” Tolson said. “Some kids just learn better by being able to put on head phones and listen to somebody teach them through the computer and drown out the outside noise.”

The model seems to be working, as this year’s students –- enrolled half day — have completed as many courses as those competed last year in a full day.

About half of the students are from Godwin and the other half come from other school districts. Godwin also has a partnership with Wyoming Public Schools, which eliminated its alternative ed program. “Most kids know they can work for four hours, and then go home, or go to their job. They have a little more autonomy to work through their classes and how they want to work,” Tolson said.

“While many students are at the Learning Center because of behavioral issues, that’s hardly the case for everyone,” he said. “For some is an academic issue, for some is a combination of behavioral and academic issues. For others, it is just circumstances going on in their own personal lives. And for some, that format works better for them,” he said.

That’s the case for Kashmere Farmer, 16, of Wyoming, who found herself struggling to meet the requirements at the high school despite working hard. “I was doing good but my grades weren’t that good. Here, it’s quicker. You can go at your own pace. It’s easier to do classes online than doing it at the high school.”

For Cruz, the adjustment was a bit more difficult. “Trying to learn the material by yourself and trying to understand it has been hard. I have to make up for stuff I missed. I’ve foundthat one (subject) follows behind the other. Geometry is based in Algebra I. Since I didn’t pass Algebra I, it made it a struggle for geometry,” he said. “I feel like being in a computer I get more work done during the day. But then, again, I’m not having that one on one with the teacher.”

“If I could be a freshman again, I would just stick to my books and do whatever my teachers told me to do,” he added.

Administrators said they have great hopes for the 36 students that graduated last week. “Many of our students are college bound,” Tolson said proudly. “They didn’t take the traditional route, but they are college bound.”