Mr. Bill: From Student to Superintendent, and Everywhere In Between 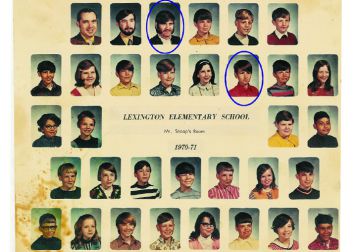 He knows what it’s like to be a principal, for instance, because he was one.

He understands the challenges faced by teachers, because he was one of them, too.

And he knows what it’s like to be a custodian, because he’s shined schoolroom desktops and buffed floors and swabbed toilets.

Which explains why Fetterhoff isn’t one to resort to the “totem pole” to explain roles and responsibilities within a school district.

As far as he’s concerned, everybody who pitches in is just as important as the next person – and it doesn’t matter whether your collar is white or your blood is blue or on which side of the tracks you were raised. “I’m a simple man living in complex times,” he says with an easygoing smile. “And I never want to forget where I came from.”

Refreshing, isn’t it? After all, the image of a school superintendent doesn’t always have its roots in the unclogging of drains and mowing of lawns.

But those were among Fetterhoff’s first duties in The Land of Education, where he spent the better part of two decades slopping tables and mopping floors for Grand Rapids Public Schools.

Learning his work ethic in his parents’ West Side store

It was a natural progression for him – and one in which he took great pride — a kid who grew up on Grand Rapids’ Lower West Side and was so young when he first went to work in his parents’ store that he had to stand on a milk crate to operate the cash register.

It’s long gone now, but Len’s Market was part and parcel of a hardscrabble neighborhood that back in the 50s and 60s teemed with an eclectic mix of varying cultures and ethnicities.

Located on West Fulton Street between Gold and National Avenues NW, Len’s gave young Bill his first taste of what it was to work long and hard, touchstones that would serve him well as he wove his way through the educational milieu, and years later became Godwin’s super.

It’s a job he doesn’t take lightly: “Basically, I’m running a $32 million company, so I take care of it like it was my own family.”

Indeed, “family” emerges as a constant theme in the way he administrates.

Though raised as an only child, he learned early on how we all support one another.

He grew to adopt a second family when he enrolled as a youth at Lexington Elementary School, from which he culled “some of my fondest memories.” They would include cementing friendships with then-fledgling teachers like Bruce Snoap, who invited students to join “The Knights of the Round Table” that rewarded them with trips to Lake Michigan and elsewhere in exchange for performing at their best.

Snoap has vivid memories of that era, recalling that Fetterhoff was one of his top students and how even then, “I knew Bill would make somethingof himself.”

Snoap remembers how he and the Knights would revel in simple pleasures, including trips to an ice cream parlor where Fetterhoff and his friends – Mike Corey and Paul Herweyer – would order a small dish of ice cream and four spoons for the quartet.

“I wouldn’t trade those times for anything,” says Snoap.

As a pre-teen, Fetterhoff engaged in modest pastimes borne of his environs: serving his church as an altar boy, dirt-biking at Butterworth Dump, waiting until after dark to scale the wall of the old Lincoln Park pool.

Fetterhoff enrolled at Union High School, but it wouldn’t last for long. After one semester, he was encouraged by another teacher to attend City High. He graduated from there in 1978.

Along with working the family store, Fetterhoff also snagged jobs at Fulton Pharmacy, and what then was the Pantlind Hotel, as a busboy.

He ventured to MSU, but eventually “lost my way exploring the crevices and crannies of East Lansing,” and wishes now he would have tried Grand Rapids Junior College first.

He returned to his hometown and signed on as a janitor with Grand Rapids Schools, splitting his time between working nights and attending school by day – at Junior College and then Grand Valley and Aquinas.

At work, the man who came to be known as “Mr. Bill” always had one eye focused on the working end of his broom, “But I also saw a lot of great teachers and a lot of great teaching” at Kent Hills, Mulick Park, Shawmut Hills, Ridgemoor and all four city high schools.

“As a night custodian,” Fetterhoff recalls, “you could see who stayed after, and who was just there to collect a 9-to-5 paycheck.”

Eventually, Fetterhoff had seen enough of those good teachers to understand that he wanted to be among their ranks.

The custodial life had been “a good gig for a single guy,” but marriage and a family now loomed, and he found himself participating in the education process even while dressed for janitorial duty.

“At one point, he became so integral to our staff meetings, that I sometimes wondered, ‘Am I in charge here, or is he?,’” Judy Freeman remembers with fondness.

Freeman was directing a Grand Rapids-based program for gifted & talented students at the time, and Mr. Bill, the janitor “was as creative as any member of that staff,” Freeman says.

He also revealed an intensely creative side, dressing up as “Zero The Hero” and as Elvis Presley and as “The Trash Monster” to simultaneously humor and educate students.

It was Freeman, among others, who, according to Fetterhoff, “kind of gave me a boot in the pants” and insisted he finish college. He finally did in 1996, graduating from Aquinas College with a degree in social sciences.

He was 36 years old. He was sporting a ponytail. And he was bartending part-time at Lakos’ and the Bostwick Lake Inn.

But in moving his tassel from right to left, he knew his destiny lay in education, and after a few years teaching third grade at GR’s Burton Elementary, he headed across the state of Michigan to North Branch.

Money was tight, and he and wife Linda were raising three kids with another on the way. They couldn’t sell their house as fast as they’d wanted, so Mr. Bill ventured east in solo fashion and while teaching school, lived the first few months in a pop-up camper.

By October, it was beyond cold, and he survived thanks to two ceramic heaters and the warmth provided by hunting socks.

Finding a home in Godwin Heights

His heart still yearned for West Michigan, though, so after several years in North Branch, he found his way to Godwin Heights, where he moved from a director to principal to assistant super to super.

Along the way, he earned a master’s degree from CMU in educational administration.

Even today, Mr. Bill talks about his “points of reckoning,” not in terms of how he ascended, but just plain grew.

At every opportunity, he is quick to thank the unsung heroes who helped him gain on jobs. And that includes a lot of people in the Godwin and greater Wyoming area.

“I love this community, because they value education,” he says. “And it’s all about the team – the people in the trenches especially. None of our jobs went away when we had to make cuts. They were absorbed by the existing individuals who do more with less because they believe in kids and their future.”

In equal measure, he will honor everyone who works hard to earn their paycheck – teachers, bus drivers, lunch ladies, paraprofessionals. And custodians.

“Those people are all important, and part of the teaching environment.”

He looks back and says he wouldn’t change much. “I think I have a sense of credibility because I’ve played so many different roles in the schools,” he says. “I have a holistic picture of the district. And I’m a believer that relationships build credibility.