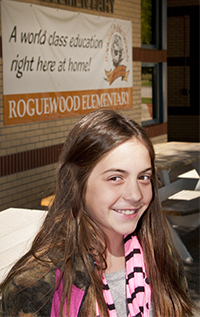 Remember when you were 10? For a lot of us, life revolved around only a couple of things – simply playing outdoors, for example, and maybe trying to squirm out of homework. But for a half-dozen young ladies who represent Rockford and East Grand Rapids Public Schools, hardly.

One activity at a time, they’re moving far beyond egocentric lives and soaring into the future committed to serving others. Incredibly, their efforts include a cow named “Missy.”

In fact, these generous girls have been reaching out since they were all just 2nd graders, thanks to an inventive collaboration borne of Sydney Judnich’s desire to form a “club.”

“I said one day to my mom (Mary) that I wanted to start a club, and what we came up with was a community service club,” Sydney remembers. “And I liked that idea.”

Mother and daughter talked, and designed some ground rules. First, it was perfectly OK if the friends Sydney asked to join said no thanks. And second, the number of girls that joined couldn’t be more than what the two Judnich vehicles could accommodate.

Eventually, the number they settled on was six, and they include Sydney and friends Melanie McBain, Cassidy Gregory, Ellie Sagorski, Mary Jane Cormier and Adele Berg-Peterson.

Starting with a Planning Sleepover

But before they went all gangbusters on social action, they took more than a mere moment to plan. That meant a 24-hour strategic planning session (read: “sleepover) in Sydney’s back yard.

Huddling in a tent with flashlights glowing, they eventually decided that their club needed a name, a song and some sort of compass to guide them

Come dawn, they’d settled on the moniker “Step By Step,” inspired in part by the lyrics of a song that would help serve as their mantra, an uplifting tune entitled “The Climb,” written by Miley Cyrus when she was better known as Hannah Montana.

Their mission, quite simply, would be this: Assist people in need, and in doing so, serve the community.

With all their parents chipping in on ideas, the girls set their sights first on improving the landscape at Rockford’s Roguewood Elementary School, where all attend but Mary Jane, who’s a student at Lakeside Elementary in EGR.

Working on three separate plots that grace Roguewood’s front entrance, the girls learned what it means to get your hands dirty in the name of pretty plantings.

Next, they turned their attention to ACCESS of West Michigan, a faith-based non-profit which teams with some 300 congregations to offer food and educational classes to the hungry.

Under the watchful eye of Mary Judnich inching alongside the curb in her car, the girls went door to door in search of donations. “They took that to the hilt,” Mary remembers. “I ended up having to call my husband to tell him to bring the other car because mine was full of food.” 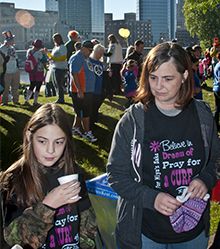 The girls learned a lot that day in their doorbell-ringing effort. One, that there are hungry people in our midst. Two, that if you ask, there are people willing to give. And third, for one girl at least, that engaging strangers on their front porches is a good way to get over your shyness.

The girls were so buoyed by their fledgling initiatives, they couldn’t wait to embark on more projects. Just weeks later, they found themselves inside a Methodist church that was hosting homeless people overnight as part of a widescale effort known as Interfaith Hospitality Network (now called Family Promise).

“We made the beds,” says Sydney. “And the lesson learned that day was seeing that some people carry all their belongings in a garbage bag.”

While still 2nd graders, the girls helped arrange Thanksgiving meals for more hungry people, and also wrote notes at Christmastime to men and women residing at the Grand Rapids Home for Veterans on Monroe Avenue NW.

Picking out food for the former effort helped them understand the importance of checking expiration dates on certain foods, and also working within a budget.

As 3rd graders in their club’s second year, the Step By Steppers involved themselves in projects that celebrated Earth Day, and efforts sponsored by the West Michigan Environmental Action Council. They also sold lemonade to raise $120 to provide art supplies for a group of senior citizens in Grand Rapids’ Heartside district.

Buying a Cow to Help Feed the Hungry

Last school year, as 4th-graders, they took on perhaps their most ambitious project to date – acquiring a live cow and then working hard to convince others to help them pay to have it butchered on behalf of even more hungry people.

With permission from Roguewood Principal Doug Hoogerland, the girls staged a dodgeball event to raise funds toward that end, though they found themselves cornered at times in explaining the validity of the effort.

“At first, everyone at the school thought we were crazy for buying a cow and butchering it,” says Cassidy Gregory. “They were, like, ‘No way am I playing dodgeball to butcher a cow and everything’ but then we explained that we were giving the meat to a food pantry for people who don’t have food.”

In the end, the dodgeball event was a success, raising about $700 to purchase and process “Missy,” a cow who, at least until this coming January, is enjoying the good life on a farm near Sydney’s grandfather’s farm in Alpena.

While the bovine effort is ongoing, Sydney & Friends continue to seek other ways to reach out.

ACCESS of West Michigan continues to be a regular beneficiary, and they’ve also made inroads with Habitat for Humanity of Kent County, which partners with people willing to invest their own resources and sweat equity in order to have volunteers help build them a new dwelling.

This school year, the Step By Step club has participated in a walk to benefit diabetes, and is constantly on the lookout for other ways to make a difference.

“I get happy every single time people thank us,” says Cassidy. “They obviously know now that we’re a community service club, and we’re proud to have people find out about us.”

The only drawback club members have had to contend with is keeping a cap on the number who can belong, due to logistics.

“That’s hard for us,” says Cassidy, noting that “we’re not trying to disappoint people” who would like to climb on board. And besides, there’s nothing stopping other boys and girls from starting other similar clubs.

Mary Jane, who attends the EGR school but went to Roguewood when the group began, says that she and her friends give back because “it’s just really a good feeling,” adding that “I can’t give them everything I have, but it’s nice to give them what I can give them.”

Cassidy points out that none of the girls dreamed their enterprise would become such a positive force. “When we started the club,” she says, “we thought it wouldn’t work out so much. We actually thought we mighthave a gymnastics club instead, and we were thinking about getting our own gym. And of course, that didn’t happen. I mean, we were in the second grade!”