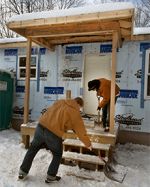 When people who know John Kozal consider the touchstones of his life so far, these are the elements that rise to the surface: Driven by faith, loving father, dedicated dad, conscientious worker, long-time relationship with the Boy Scouts of America.

But Kozal will be the first to admit that his persona wasn’t created in a vacuum.

He had a lot of wind at his back.  And so, when he got word that Grand Rapids Public Schools was seeking men and women to serve as mentors, he didn’t flinch when his supervisor at Universal Forest Products asked if he’d be interested in volunteering.

“Sure,” he answered immediately.  “You need to be a beacon at the top of the hill. Who lights a candle and puts it under a bushel basket?”

Kozal is every bit the consummate engineer. He keeps meticulous notes. Buttons the top button on his sport shirts. Measures every word before speaking. Appreciates economy, form, function.

And his love of all things engineering is something he craves to share.

He got his chance over the last four years in partnering with GRPS’s “Academy of Design & Construction,” which, during Kozal’s years of service, was located at Union High, and recently shifted to Central High.

It’s at Union where he befriended several young men looking for ways to enlarge their worlds and sharpen their focus, all of them eager to learn skills not typically taught in a conventional classroom.

In essence, that’s the same goal of the program, to put the microscope on architecture, engineering, design and construction. Instead of relying on just books and lectures, though, students are encouraged to get their hands dirty with real-life experiences, and alongside industry professionals who are eager to connect their students with the outside world.

Witner DeLeon, 19, took away lessons he never imagined: “Mr. Kozal helped me a lot, and taught me some things that could change my life.”

Witner now works full-time in a warehouse, shipping cargo and operating a forklift. But his dream is to attend college and become certified as a welder, and perhaps someday open up his own shop.

Michael Shakoorbradley, also 19, teamed with Kozal as well. “He was a great mentor and helped me a lot,” says Michael, who has his eyes set on college, and the opportunity to work in the construction trade, possibly allying with Habitat for Humanity.

Had Kozal not intervened in the lives of Witner and Michael, they might have settled for a high school degree but no desire to pursue college and the career advancement that experience can render.

What both have in their back pockets now is passion, thanks to a soft-spoken married father of one who doesn’t do much of anything in simply first gear.

A native of Sparta, John Kozal, 47, grew up on a farm, and was fascinated at an early age with everything from barns to bridges. “I really enjoyed anything that was built.”

On his parents’ 78 acres, young John learned alongside his parents and five siblings how to operate a tractor, repair equipment, safeguard the home and construct outbuildings.

He graduated from Sparta High, and simultaneously emerged as an Eagle Scout. “I was just a very driven young boy. Everything I set out to do was fun. And I think life is meant in part to be fun. Find whatever it is you want to do, and set out to be good at it.”

As a young teen, he’d already figured out that he wanted to become an engineer, and enrolled at Grand Rapids Community College, where he qualified for some partial scholarships.

He recalls being belittled by some for attending what they dismissed as “13th grade” and “Raider High,” but he never wavered, and considers his two years there a solid building block for what lay ahead – a bachelor’s degree from Michigan Technological University.

He graduated with honors, and looks back on his education as a time to endear himself to civil engineering, specializing in the study of structures.

Throughout his formative years, he embraced the wisdom and advice rendered by his parents, his teachers, and a friend of the family he came to know as “Grandpa (Cornelius) Stewart,” who lived in Kentucky.

Stewart was a proud veteran who had worked alongside other men to help build the American-Canadian highway to Alaska. A font of information and inspiration, Kozal found meaning in his own life by absorbing the lives of others, Grandpa Stewart included.

“As an 11-year-old boy at the time, he had me put together a map and compass course, and he checked my work and told me it was great. So yes, he was a mentor, and after he died, I learned he’d left me $1,000 for college.”

Even an industrial accident couldn’t dampen Kozal’s enthusiasm for life. He was working for a truss manufacturer one summer during his college years when his left hand became tangled in a press. He lost the better part of three fingers.

While recuperating, his situation was compounded by a persistent cyst at the base of his spine that refused to heal, despite repeated surgeries.

Another man might have used the setbacks as an excuse for future achievement. But Kozal called it “probably the best thing that ever happened to me,” rationalizing that it helped him re-arrange his life with the knowledge that “even if you plan things and work hard, good things don’t always happen.”

He keeps in mind his own accident when he surveys others who are beat down by circumstances not under their own control.  And figures that for those individuals, it’s up to the rest of us “to reach out.”

In February 1994, a few months following graduation from Michigan Tech, Kozal was hired at Universal, his first and only full-time job, one at which he still works, as an engineer.

A decade later, he married, even approaching that day with the psyche of an engineer – waiting longer than most to discover his perfect match in Jayne, who was a teacher and now homeschools their son Curtis, a first-grader.

Curtis, by the way, is named after the Curtiss-Wright Corp., which specializes in aircraft and aerospace products. Flying is another important interest for Kozal, who earned a pilot’s license shortly after completing college. He and nine others share ownership of a Cessna 172, which is hangared at the Paul C. Miller Sparta Airport.

Kozal also warms to activities with the Scouts. He serves as assistant Scoutmaster with Troop 704 out of Sparta, and often brings Curtis along on excursions, including a wintertime camp-out.

It was in 2009 that Kozal was invited to participate in the Academy, and he remembers going to initial meetings and thinking that “I wanted to be part of that excitement.”

Over the course of the next four years, Kozal met about every three weeks during the school year, mentoring a trio of Union High students interested in construction and engineering.

They visited downtown Grand Rapids to take in the varied architecture of bridges and buildings. They lunched together.  And they visited Habitat for Humanity projects, sometimes observing and sometimes pitching in. They also entered competitions, including one where students were invited to build small-scale bridges from pasta and glue, and have them subjected to weight-bearing tests.

Kozal took a personal interest in each student, remembering them on their birthdays with gift cards. He took the time to ask how they were doing in school overall, and hired them part-time to work on the family farm.

One of Kozal’s young charges, James, was so grateful for the experience that he produced a hardcover book chronicling his experience in text and photos. 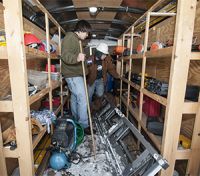 “John Kozal is everything I had hoped a mentor would be,” James wrote in the book. “He is an experienced and trusted advisor…and a good example of what a professional in the design and Construction industries is and does. He is dedicated to us students, to his work, to his family and community.

“He tries to help us better ourselves, and he cares about all of our futures.”

Michael Shakoorbradley echoes the admiration expressed by his classmate, and noted that with a mentor like John Kozal in his corner, he’s learned to work hard to achieve success: “He taught me to always push, and never give up. If there’s anything I want to do, it’s up to me to put my mind to it.”

Kozal slid out of the Academy mentorship program this past year to devote more time to Curtis, who needs more and more “dad” time.

But that’s not to say Kozal won’t be looking for other opportunities to chip in, and he hopes his actions serve as an example for others with professional gifts to share.

“Everybody needs a helping hand,” he says, “and I hope God gives others that appreciative heart.”