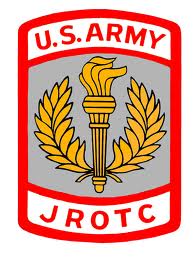 Innovation Central High School is known for its Center of Innovation programs, but a new program, The Junior Reserve Officer Training Corps (ROTC) program, has been offering its own unique experience.

JROTC is offered as a class during the school day, as well as an official after-school class.  A total of 82 students- or 11.1% of the total student population- are enrolled in the three classes making up the ROTC program at Innovation Central.  The school battalion (total cadet population) has students from all four Centers of Innovation, Montessori High and the students who came from Creston High School as part of the GRPS Transformation Plan.

The class and the program are run by Lieutenant Colonel Don Robinson, who is in his 10th year as the Senior Army Instructor of JROTC and the Designated Director of Army Instruction for all of the JROTC programs in GRPS.   Before working for GRPS, LTC Robinson held many positions while serving 20 years in the Army and around the world, and as a member of the Army Staff at the Pentagon and finally as the Vice Commander of the Defense Courier Service (Part of the National Security Council of NSA).

Robinson said of his life, “All these experiences were just preparation for the most important job of my life . . . Helping teenagers become successful so they can be the future role models in their communities after high school. Every soldier should want my job; having the opportunity to share the struggles and triumphs that these kids face today gets into your fiber.  It isn’t what you do; it is what you become.”

LTC Robinson is aided by Master Sergeant James Peterson, who is in his 2nd year as an Army Instructor with GRPS.  “Sarge” served in the Army for nearly 23 years around the world, and as Recruiting Station First Sergeant in Chicago and Grand Rapids Areas. James Peterson is a 1987 graduate of the GRPS’ Union High School.

Some of these duties required of the JROTC are important, such as presenting the colors at more than 25 ceremonial and civic events during this current school year. The cadets proudly raise the flag daily at Innovation Central. One of the major events every year is participation in the Veteran’s Day Parade where 90% of the cadets showed respect to all the service personnel in Grand Rapids.

“JROTC cadets are present and help out at nearly every single school-related function and are a great presence at our family nights, parent nights, and at conferences,” said Innovation Central Principal Mark Frost, who feels that his school is better off with the JROTC program in his building.  “The cadets dress in uniform every Wednesday and look and act the part.  For many cadets, that discipline carries over throughout the week and builds through the students’ high school careers as they move from 9th grade to graduation.

The newly relocated Battalion was able to continue as the host of the Western Michigan Drill Meet, an event that GRPS has been able to host for over 22 years. This year 14 schools brought nearly 500 cadets from all over the state to compete in this annual competition. Innovation High shared classrooms and its limited gym time so cadets could run the event and participate in the team competitions.

JROTC cadets filled other roles, participating in Rotary Club meetings and the Heritage Hill Community Association Meetings. Cadets represented GRPS in the Diversity Forum at Aquinas College and assisted with the food distribution from the Feeding America food truck that comes to Innovation Central’s monthly family night events.  They also attend several community-related events, such as the Creston Car Show, collecting for the Toys for Tots Program and presenting the National Colors with their color guard at the Immigration and Naturalization Swearing in Ceremony each month at the District Court held in the Gerald R. Ford Museum.

Ron Gorman, GRPS executive director of Secondary Education, former Creston High Principal and supporter of the JROTC’s move to Innovation Central shared his experience with JROTC. “As the Creston principal, I saw a young man who exhibited some very negative, immature behaviors early in his high school career rise in maturity and ranks all the way to the JROTC Battalion Commander at Innovation Central and is earning all A’s.  I clearly see the power and positive influence that the JROTC program can have on students.”

When asked about having gone through his high school career as an ROTC cadet, Jake Buitendyk, who plans to attend Aquinas College and major in medicine, said, “I had a rough start in High School. If it weren’t for JROTC, I probably wouldn’t be ready to graduate this summer.”

Cadet Deon Patin agreed with Buitendyk, “JROTC gave me a chance to grow up and learn how to be a leader.  JROTC fit in all my team sports events, and my instructors were always there to help me balance my school work and all the rest of my life. Sometimes, they just listened; sometimes they kickedmy butt to make me better than I’d be without JROTC.”