By most accounts, Derek Brandon is a typical kid of 15.

He’s a freshman at Thornapple Kellogg High School. He’s growing out of his clothes, sports just a hint of acne, and likes to swim and play basketball.

His mother Shannon works for a property management company and his dad Terry oversees machinery and maintenance at a wholesale bakery. He’s got a younger brother Dylan, 11, and they share a two-story home with their parents along a rustic road.

Derek’s bedroom, which looks out on a stand of woods, sports a bed, a chair, and pictures and posters. So, really, a life that’s not too extraordinary.

Except for one thing: he’s a budding movie star.

We’re not talking the subject of YouTube videos, either, where you and your friends take turns jumping off the garage roof onto mattresses, or stage pranks that embarrass your little sister or Mr. Grumpy at the end of the street.

Hollywood. Rubbing shoulders with real-life stars of the silver screen. And membership in the Screen Actors Guild, the American labor union that represents more than 100,000 film and television standouts worldwide.

Which is a little difficult to comprehend because when you meet young Derek, he acts nothing like the personas advanced to us by the slick magazines we read in the doctor’s office.

He’s even a little on the shy side – confident enough to give you a strong handshake and look you in the eye – yet refreshingly, well, all of 15.

“He’s a great kid, a very regular kid,” says Tony Koski, principal at Brandon’s high school. “Very involved, lots of friends, but he doesn’t let the (notoriety) affect him in any way. Humble? Yeah, that’s probably the word. Because he doesn’t let it take over. Humble is a very key word.” 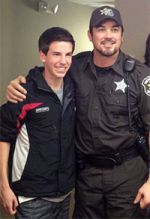 My own prediction: This kid’s gonna stay grounded.

The worst grade he’s ever earned in nine years of school is an “A.” He plays on the freshman basketball team, a spot he had to earn. And he has his ears tuned to the right people – his parents, his teachers, and perhaps especially his grandmother, Donna Scott, who’s adept at being both his mentor and fan.

Since losing her husband in the fall of 2007, Donna has dedicated much of her free time to her grandson, helping him with the reading of scripts, serving as his chauffeur, and even accompanying him on far-flung trips to the West Coast.

But she eschews singling herself out, choosing instead to focus on the wider net that helps Derek focus, one that includes family, friends, educators, and more: “We’re all behind him 100 percent.”

Practicing Lines as a Pre-schooler

Derek got his formal start as an actor as a pre-teen, but his first blush with hamming it up actually began around the age of 4.

“As a little kid,” remembers mother Shannon, “Derek would have us all re-enacting his favorite movies. The one that always sticks out is ‘Beauty and the Beast,’ where he’s Gaston andI would be Belle, and we’d be saying our lines and all of a sudden, Derek would stop me and say ‘That’s not what Belle says there!’

“And then he’d do her lines, correcting me, and showing me how to do it, and he would just get so into it.”

And after they both laugh in remembering, Shannon mentions “the rock,” and Derek hangs his head and blushes just a little, but he can’t argue that as a tot, whenever he saw a certain boulder, he’d jump atop it and start performing.

So it was in his blood. And nobody knows the origin exactly. The kid was just destined to act.

Derek was a natural for the four years he participated in Civic Theater productions in Grand Rapids, so much so that he was soon recommended for films being shot by area colleges.

After that experience, his mother recalls, “It was goodbye stage, hello camera.”

With assistance from Fahey-Dreyer Casting here in West Michigan, Derek was soon traveling and making connections. Today, he has agents in Detroit, Chicago, and Los Angeles, all scouring the film industry for projects that would be a good fit.

Co-starring and Missing the First Month of High School

He landed big when asked to co-star in the making of “The Adventures of Mickey Matson and the Copperhead Treasure,” a PG-rated flick that also features Christopher Lloyd (Back to the Future series), Ernie Hudson (Ghostbuster series, Beverly Hills Chihuahua 2 & 3) and Lee Arenberg, (Pirates of the Caribbean series).

Derek was in middle school when the “Mickey” movie debuted in May of 2012, so it’s no surprise that classmates, drawing on his role of “Mickey,” began singing Toni Basil’s 1982 one-hit wonder “Hey Mickey,” with the catchy refrain that goes “Hey Mickey, you’re so fine, you’re so fine you blow my mind, hey Mickey…hey Mickey!”

Again, he blushes. Just comes with the territory.

Derek sometimes has to leave the area for up to six weeks at a time to work on a project, and that included his first month of freshman year last fall.  He filmed the second Mickey Matson movie in what is intended to be a trilogy, with production on the final movie to begin this summer.

“I was nervous and scared,” Derek says of missing the first month of freshman year, “but the teachers made me feel really comfortable and helped me with all the work I had due.”

Missing school means missing basketball practice as well, and Derek’s coach, Josh Thaler, points out that his player “was pretty upset the couple times he missed out, and that kind of attitude, that kind of loyalty, went far with his teammates. “He’s just an absolutely great kid.”

Derek doesn’t fancy himself different than anyone else who has a dream. It’s just that he figured his out at an early age, and its effects are more public. “I’m like everyone else,” he maintains. “I just have a passion, and it’s a little different from the kind of passion that others might have, and so not everyone understands. But I’m just like all of them.”

While acting feeds his own appetite, he’s just as grateful for what he might impart to viewers: “I got captured by the movies, and they make me feel something, and I like making people feel something, to look differently at things.”

Derek draws his inspiration from actors like Tom Cruise and Selena Gomez, but he also has a forever spot in his heart for his late cousin Keisha MacDonald, who was on the verge of making it big, but was killed in a car accident at 18, when Derek was in the 2nd grade.

Derek not only has a yen for the screen, but an ability to easily memorize lines. “I can just, like, see thewords,” he says. As far as branching out, he can’t see himself as a crooner yet — “I don’t think I’ll ever be able to sing” — though he held his own with a hip-hop dance class.

Advice and Encouragement from Fellow Actors

Fellow actors who worked on the set of the Mickey Matson movie – and others he’s met — have been encouraging Derek. Christopher Lloyd reached out to Derek’s parents, telling them “He’s got what it takes; I can see it in his soul.”

Ernie Hudson told Derek how much he appreciated his professionalism on the set. And Florence Henderson told him, “Never, ever quit doing what you’re doing because you’ve got what it takes.”

And this from the late actor Ernest Borgnine: “Stay true to who you are, and keep your feet on the ground.”

As a paid unionized actor, Derek earns cash for every hour he puts in on a movie. The family doesn’t talk numbers, but it’s no secret Derek’s stashing away enough to put a hefty dent in college tuition costs that may soon surface.

Until then, he’s enjoying all the joys and trappings of high school, including a freshman basketball team that went 10-9 this past season.

And speaking of basketball, just like a lot of other ordinary kids, he was rooting for his favorite, U of M, in the NCAA March Madness and hoped they’d go all the way.

Hey, at least he didn’t pick some California team.