R.I.P. to Stereotypes of Low-income Students

They can’t learn like my other students. They’re too lazy to finish their homework. They’ll never go to college. They’ll live in poverty all their lives.

When stereotypes of low-income students are given a proper burial, schools can see significant academic achievement, say researchers-authors William Parrett and Kathleen Budge, who spent a recent morning with educators at Godwin Heights Public Schools.

“Our book challenges entrenched stereotypes,” said Budge. “Images and stereotypes shape behavior and attitudes limit our ability to change. As humans we tend to only take in information that we already agree with.”

Teachers and administrators who refuse to pigeonhole poor students pave the way to a promising future for young learners, say Parrett and Budge, authors of “Turning High-Poverty Schools Into High-Performing Schools.”

Reaching that goal requires educators to adopt new strategies of teaching as well as implementing an inclusive culture within their school districts. Godwin Heights Superintendent William Fetterhoff said he thinks Parrett and Budge’s presentation to staff will enhance his district’s learning environment.

“We need to make sure our practices support student learning and our goals,” Fetterhoff said. “We need to look back at the failure rates and ask ‘what can we do differently to achieve best practices?’ Today’s plans need to be individualistic in terms of students’ education.”

“High performance schools have good attendance, graduation rates are above average and parental involvement is above the norm,” said Budge. “It wasn’t just about test scores. The good news is it can be done in every single school.”  She is coordinator of the Leadership Development Program at Boise State University, which helps develop school leaders who are committed to these strategies and goals.

Nationwide, the authors said, the schools that transformed low-income students with lower achievement into high achievers had the following strategies and actions in common:

• Strategy No. 1: Eliminated the tendency to blame students and their families.

It’s all too common for educators to blame parents and one another, said Parrett.

And sometimes bigotry rears its ugly head, said Parrett, director of the Center for School Improvement and Policy Studies and professor of education at Boise State University. He recalled consulting with a school district last year where one teacher said the reason for students’ inability to learn was because they were from a “low gene pool.”

“That’s another term for racism,” Parrett said. “Blame is something you need to get out of your system. It’s toxic. It mitigates against achievement.”

• Strategy No. 2: Established a physically and emotionally safe environment. Be diligent against gangs and bullying, he advised. 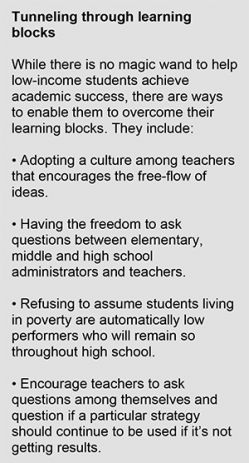 • Strategy No. 3: Established an accurate understanding of poverty. This goes hand-in-hand with scattering myths that include ideas like: poor people are lazy, they bring their poverty onto themselves, they make poor choices and finally, that they don’t value education.

Sometimes poor students don’t learn as well as others for reasons that may not be obvious on the surface, said Kyle Teeples, a 9th-12th-grade algebra and math teacher at Godwin Heights High School. He previously taught at a school in Houston where he saw things like diet play a role in learning. He said it was not uncommon for his students to survive primarily on macaroni and cheese as their main foodstuff.

• Strategy No. 4: They did everything possible to level the playing field. This means low-income children can feel left out when school districts request additional money from parents to play in sports, purchase workbooks or advanced placement tests.

“Ask if it’s reasonable? Is it fair?,” said Parrett. “If not, what are we doing about it?  Do we have a policy we can all stand behind? Poverty teaches kids they don’t belong and schools may imply that,” said Budge. “For example, if they can’t afford school supplies, they feel they don’t belong.”