Attack of the Whole Grain Pop-Tart 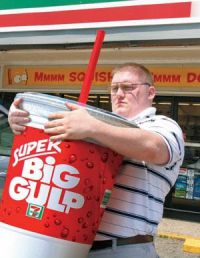 Editor’s Note: At Recess is an occasional humor column that takes a lighter look at schools and education. Funny things sometimes happen when you work with kids — or adults! The views expressed represent only the views of the writer and are offered in lighthearted fun.

But behind their smiles is a smirk. This salt-of-the-Earth crew has pulled off a covert operation few have noticed. The mission? Stick whole grain into everything they feed students, even Pop-Tarts.

They claim the reason they had to do this is because the Healthy, Hunger-Free Kids Food Act of 2010 required it. They said they wouldn’t get a whole bunch of bucks from the government if they didn’t do it. Changes to breakfast and lunch menus already have occurred over the past few years because of the act (that’s why your child knows what fruit is now). Making sure a la carte items are healthy will be tackled next.

The multi-grain rules were put in place over the summer when no one was watching. Except the government, of course, which came close to purchasing shoe phones until they realized shoe phones did not have multi-grains in them.

The upcoming changes have raised a lot of questions. These questions aren’t from anybody important (it might be me), but they are still questions.

This evil but technically good plot has been underway a few years. Here’s what already has happened.

So, there, I’ve blown the lid off the lunch ladies. I don’t think we have a chance of winning any battle because healthy meals have been proven to help grades, decrease obesity and a whole bunch more. The only help I can offer is a Pop-Tart and refried bean recipe.

When I saw it, I just about tipped over my Big Gulp.

Linda Odette thinks lunch ladies are great and hopes they all have a sense of humor, because none of the silly comments about them in this column are true. She also wants to apologize to any men who work in school cafeterias for not saying “lunch men,” but it just didn’t sound as good as “lunch ladies.” Linda is a very nice person and if this offends you, please don’t email her because it will make her feel bad. If you like it email her at lodette77@gmail.com because it will make her feel good.