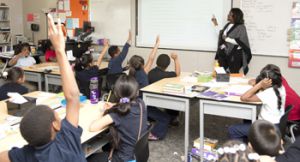 The district reported losing fewer than 100 students on Oct 1, far fewer than the 400 estimated while setting the district’s 2014-15 budget.  Aside from the more than $2 million in state funding this represents, this is the smallest student loss the district has seen in two decades.  Weatherall Neal said the numbers are an affirmation of a plan endorsed by district staff and the community at large, including key West Michigan business leaders

“I believe in the district as a grandparent, so I know it’s a great district, but obviously others are starting to believe that, too,” Weatherall Neal said.  “I think this shows the power of our whole community pulling together.”

“Schools across the state of Michigan are losing students so for us to slow it down this much is a huge win,” she added.  “All of us together, the staff, the students, the school board, parents and our community partners, we all did this.”

Weatherall Neal added she’s not so naïve to believe a single year counts as a trend, but remains optimistic things will continue improving. “I hope this is not some kind of a one-year blip, so to speak,” she said.  “We’ve worked hard to determine our focus and we will not stop here on our quest to be the best.”

District spokesman John Helmholdt noted the district has made painful cuts during the past decade, trimming some $100 million in spending, closing 30 buildings and laying off about 1,000 employees.  The district has done what it had to, but he also noted since the Transformation Plan was adopted by the school board in Dec. 2012, the district has sought input from the community and forged a renewed focus on what works.

Helmholdt said the district has focused on expanding what works and eliminating what doesn’t.  He noted success at specialty schools at Blandford Nature Center and John Ball Zoo are expected to be duplicated with the opening next year of the district’s Museum School. Plus, he said the popularity of its Centers of Innovation high school programs at the old Central High School was evidence the plan is returning stability to the district.

“We’ve slowed the loss down to a trickle which is a far cry from where it was 13 years ago when we lost 992 students,” Helmholdt said.  “This is the first school year in a decade that we haven’t closed a single school — further evidence of restoring stability to the district.”

It’s All About Listening

Helmholdt noted the superintendent listened to about 1,000 school stakeholders in developing her Transformation Plan and revised it based on what she heard. “That’s the whole basis of her leadership,” Helmholdt said.

Weatherall Neal said her plans are to keep doing what’s working and creating a demanding curriculum for students in a positive learning environment. “I am extremely pleased at the momentum that we’re seeing in the district,” Weatherall Neal said.

“We are going to continue our focus on becoming the best school district that we possibly can. When you focus on excellence and create great schools, people will come.”