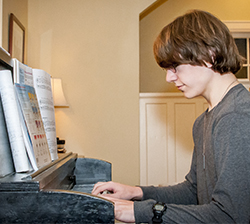 When the 38 members of the 8th grade string orchestra at East Grand Rapids Middle School sat down to play a new opus recently, it wasn’t a selection by Bach or Beethoven or Brahms.

The piece was composed by none other than a classmate.

His name is Henry Lachman.

And he has Asperger’s Syndrome.

You would hardly know it, though, to watch him as he tackles complex musical challenges inside the sun room attached to the family home that he shares with parents Sarah and Blair; brothers Hugh, 8, James, 6, and Jude, 4; and a cat, Sophia.

And you would have never guessed it the afternoon when he joined his fellow music students at the middle school to record Henry’s piece, entitled “Opus Somethin’ or Other.”

“Henry is not only one of the most fun students I work with,” says music instructor Theo Ndawillie II, “but one of the most challenging, because Henry tends to figure things out for himself. Basically, it’s a challenge to continue to find challenges for him.”

Ndawillie teaches piano and composition for Triumph Music Academy on Wealthy Street SE. He’s been mentoring Henry since early 2014. Periodically, they’ll sit together in that sunroom, daylight streaming through 11 windows that play across a teacher and his student and their musical paraphernalia.

Just a few short blocks away, Mary Hillyard is tending to the music students assigned to her from East’s middle and high schools.

In a career that’s spanned three decades with EGR Public Schools, she remembers featuring “only a few other student works in the years I’ve been here, so this is a real treat for us and for Henry.” 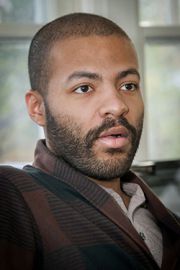 Hillyard is careful to emphasize the “us” in her statement, because it’s important to note that along with Henry’s gift to his classmate, was his classmates’ willingness to learn the opus.

“It’s a slow-tempo piece, and that’s the hardest kind to play,” says Hillyard. “It’s about four minutes long, and physically tiring to play and re-play it. The students agreed it was hard to play, but they never really complained. They were all sensitive to Henry’s feelings.”

That sense of teamwork wasn’t lost on Henry’s father: “It’s a unique group of kids he goes to school with,” says Blair. “They see through the Asperger’s.”

Henry wasn’t diagnosed with Asperger’s – a high-functioning component on the Autism Spectral Disorder – until reaching the third grade.

Even as Henry was first enrolling in school, his parents noticed their son having trouble with fine motor skills. “He struggled to hold a pencil,” recalls mom Sarah. “He needed to develop finger strength, so we consulted an occupational therapist.”

They also signed him up for piano lessons, as much to strengthen his fingers as to learn music. There were other issues to deal with as well, mostly tied to Henry’s self-esteem.

“There were a couple of years in early elementary when Henry really struggled with his identity,” says Sarah. “He couldn’t quite figure out how to fit into social groups, and I remember him trying to act weird. There was this whole period where ‘Oh, I’m just a big dummy.'”

Henry’s parents bristled at the initial suggestion from a school social worker that he might have Asperger’s. They were furious when she suggested they watch a 2009 movie entitled “Adam.” Ten minutes into the film, though, Henry turned from the TV in amazement and said, “Hey Ma, that guy’s a lot like me.”

Henry still struggles with some of the traditional academics. His parents motivate him by making contracts. If he studies diligently, he gets to put in time with the loves of his life – music, as well as art. If he strays from tasks, they’re postponed.

“It’s not that I’m bad at math, just bad at turning my stuff in,” Henry acknowledges.

Henry has blossomed, especially in the last year or so. “He’s the most curious kid I’ve ever known,” says Sarah, “and he will ask questions about all kinds of topics, some of which are deep and morose and others that are whimsical and funny.

“He’s not afraid to know himself.” 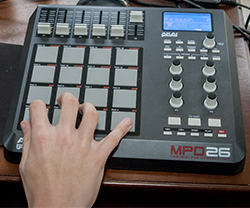 That would include immersing himself in music. Though Henry’s only been composing less than a year, he’s already penned nearly two dozen pieces, including the Opus.

He accomplishes most of it on a computer, accessing sophisticated programs like “Sibelius” to assist in the process.

It can be painstaking work, judging from the give-and-take between Henry and Ndawilllie as they share bench space: “That’s nice,” says Ndawillie, as Henry finds the ending to a little riff. “I liked that last note.”

It’s a long time before either speaks again, as Henry experiments with one note after the other, searching for the perfect complement to the notes that preceded it.

Finally, it’s Ndawillie: “That’s good. Now, if you want to keep it in 4/4 time, just add two quarter-notes in here…”

Hillyard, at the middle school, is delighted with Henry’s capacity to compose. And she’s just as proud for those classmates in the orchestra who embraced his opus and made it their own.

Those sentiments are echoed by Bill Behrendt, assistant principal at EGR Middle School, and someone whose early career centered around Special Education. “Henry has a unique set of talents, and sometimes at the middle school level, it’s finding avenues to get those talents out.”

“Henry has a great personality, a dry sense of humor, and it’s awesome that he’s been able to showcase his gifts.”

Behrendt is also impressed with how other students at the middle school have accepted Henry with no conditions. “We have a great group of kids here who celebrate uniqueness, and that’s not always easy at this age.”

Henry’s uniqueness reaches beyond the keyboard and composing. He’s got a knack for knowing when someone’s feeling blue, and it surfaced a few years ago in a profound way for his mother, Sarah. 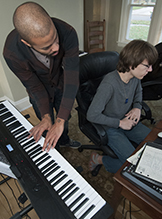 She’d left for work that morning with tears in her eyes, and Henry had noticed.

While she was still en route, Henry called her from the home and told her to listen. He then went to the piano and played for his mother one of her favorite songs.

Sarah gathers a breath in remembering: “It’s Henry on the cell phone; Henry, who almost never calls. And it’s ‘Momma, hold on, listen.’ And he sets the phone so I can hear him playing this beautiful song.

“And I go from tears of sadness to tears of joy. Here’s my own son, reminding me that there are times of tension, but also moments of breakthrough, of redemption.

“And it was really, really lovely.”