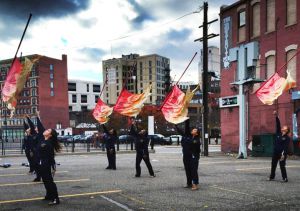 Call it a double take.

If not for 2012, it’d be a three-peat for the Godwin Heights Marching Band, which won its second consecutive title in the Flight IV Michigan Competing Band Association State Championship at Ford Field in Detroit.

Hours of practice under a sizzling summer sun, tight-knit teamwork and deft musicianship earned Godwin Heights’ Marching Band its sixth championship and second two-fer, with wins in 2004, 2008, 2009, 2011 and 2013.

Pride in the 80-member marching band’s achievement is gushing throughout the school district for garnering a total score of 90.45 and Caption Awards for Best Music Performance, Best Visual Performance and Best General Effect.

“They give up every Saturday during the fall, and commit to practices and rehearsals on multiple nights throughout the season to be a part of our championship band. Their dedication and commitment to the marching band is evident in their attention to detail, and shines brightly every time they take the field to march,” Conklin said.

“The marching band is a point of pride for our district, and I know I speak for the staff at Godwin Heights, when I say their accomplishments are earned and well deserved.”

We’re a team and a family

“We’re all a team, we’re all a family,” said senior Cassandra Hathaway, 17, who plays flute, piccolo and percussion. “We don’t think just of ourselves because what we do affects the rest of us. We have our ups and downs but we all stick together and have something that’s a constant by being in the band.”

Being in the school band benefits students in other ways, such as developing a laser attention to detail, said Cassandra’s father, Scott Hathaway. 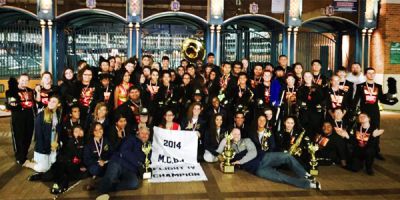 “They learn to stay focused,” he said. “They learn the value of getting up early in the morning, which for her is 5 a.m.”

High level of discipline at work

“Everyone has to look the same and work on the same technique and work on coordination, that is the ability to know the next move and the next one after that until they’ve memorized it down cold,” said Miller.

“They have to have a high level of discipline.”

Miller added the term “team effort” extends beyond its musician students. The backbone of the Marching Band are the volunteers who willingly work behind-the-scenes to sew the color guard flags, load and unload the instruments from a semi-truck and build props such as the ones for this year’s fire and ice theme used at the state championship.

“The difference is our approach to rehearsals,” said Miller. “They stand for a long period of time and it doesn’t matter if it’s raining or snowing, they’re dealing with hardships yet they’re still marching and playing.”

“We are extremely dedicated to making sure everyone has what they need and making sure we’re doing OK,” said Cassandra. “We work as a group.”