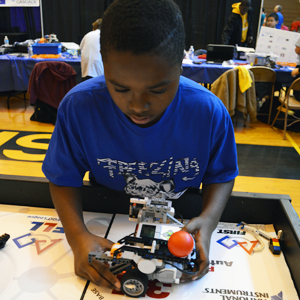 By all accounts, Bobbijo Zoerhof is a good teacher, but she admits to being stymied when it came to helping her students program a robot for their FIRST Robotics team.

That’s when a new community partnership between the Grand Rapids Public Schools and the likes of Steelcase Inc., Consumers Energy and GE Avionics came in handy. Enter Joshua Hoekstra, a project manager at Steelcase, who showed up with another award-winning FIRST Robotics team to help program a robot built by one of Zoerhof’s two teams she coaches at C.A. Frost Environmental Science Academy.

“He asked me what I needed and I told him I needed help programming our robot,” Zoerhof said. “He came in with a team of mentors and helped me with the programming.  It would have taken me six months to figure that out on my own.”

James Peacock, a community school coordinator at Martin Luther King Leadership Academy, had a similar experience when engineers from GE Aviation showed up to guide his team of sixth through eighth-graders.  You basically can’t buy the kind of experience provided by GE engineers, Peacock said.

“When you have programs like this it takes kids outside of their four-block comfort radius and helps them experience their world in a different way,” Peacock said.  “These kids never thought about engineering until they met engineers who looked like them.

“It’s not about what these kids can’t do, it’s about what you can put in front of them,” Peacock added.  “A couple of them have picked this up and run with it and I would be shocked if they didn’t continue on this career path.”

District spokesman John Helmholdt credits the new partnership with expanding the district’s robotics teams from two to 11 this school year. The district is hopeful this newest momentum shift will help attract enough volunteers to provide robotics programs in virtually every school that wants one in the coming years.

After some 20 years of cuts driven by reduced student enrollment that have seen extracurricular and after school programs like debate – valuable to students later in life – dropped, this new partnership is helping them make a comeback, Helmholdt said. For the first time in more than 20 years the district this school year posted a loss of fewer than 100 students compared to the 400 projected.

“This partnership is further evidence of the energy and momentum building around Grand Rapids Public Schools,” Helmholdt said. “For the past two decades, the district has been in a state of churn, where we have seen so many of these programs that many years ago used to be prominent in many schools around the district go by the wayside amidst all the cuts, closures and consolidation. The growth in the robotics program is really symbolic of the reinvestment we’re seeing due to the alignment of our community partners.

“Inspired by what Gov. Snyder has done and Superintendent Neal’s leadership, they came to us and said they wanted to help develop our program,” Helmholdt added. “We now have teams in all three levels and the hope is depending on volunteers to have a robotics programs in every school that’s interested.”

A handful of schools have already expressed interest in forming teams next school year. Dec. 6 saw the first ever GRPS-sponsored robotics tournament at Innovation Central High School, and that same day Zoerhof’s FIRST Lego League team of sixth-graders traveled to Monroe Michigan for the state tournament, a mere year after it formed.

Zoerhof said aside from gaining hands-on experience with science and technology, the robotics program offers students insight into well-paying career opportunities. She added the partnerships alone set a positive example about the value of working together. She noted one parent volunteered to help even though he didn’t have a student in her class or on one of her two teams. 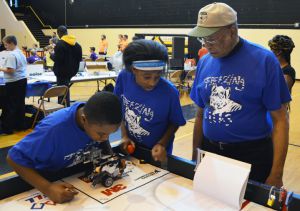 “He doesn’t even have a kid on my team or in my class, but his boys were so interested they went home and told dad about it and he showed up to help me,” Zoerhof said. “These relationships are so rewarding and we’re teaching that to the kids.”

A writing class that’s ‘way more than that’