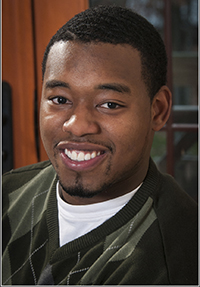 Ladies and gentlemen, keep your eyes on this young man.

I’ve been wrong before, but something tells me the name “Leighton Watson” will surface down the road in more ways than one, and possibly in a manner that eventually makes him a household word.

The Kent Intermediate School District turns out a lot of outstanding young men and women, and for myriad reasons. They’re conscientious. They’re smart. They’re resourceful. They have servants’ hearts.

But Leighton Watson, 21, seems to have all these gifts – and more.

Just a few short years out of Lowell High School, from which he graduated in 2011, Leighton is making his mark in profound ways not only at Howard University, where he serves as Student Association President, but in his latest role as White House adviser.

Not only did he distinguish himself as a student and athlete at the Home of the Red Arrows, but he’s now sitting on a task force appointed by President Barack Obama to explore policing standards in the wake of the deaths of African-American men at the hands of police that have prompted nationwide protests.

“I’m not naïve to the fact that he may have been killed anyway,” Leighton says of the death of Michael Brown, an unarmed black teen who was shot and killed by police officer Darren Wilson in Ferguson, Missouri. “But we have to have accountability for cities and their officers.”

He went on to say on his Facebook page recently that “I appreciate the President taking the initiative to commission this task force,” adding that, “Yesterday, as I sat with him in the Oval Office, I truly do believe he is passionate about this issue and committed to finding solutions.

Leighton’s come a long way from the mostly rural fields and farms that largely comprise the school district in which he was raised for most his teen-age years.

Together, his parents have raised Leighton and his younger siblings Pierce and Alon in a fundamentally Christian setting, where the Bible is, in his father’s words, “the foundation for everything” and “your basic instructions before leaving this earth.”

Glenn and Tina don’t apologize for raising their children in what Glenn describes as the “old school” way, which means “hot breakfasts together and dinner every night” when possible. 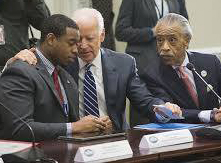 And when it comes to meting out consequences for their children’s actions, Glenn notes that “Our culture is that you will be disciplined, because if we (as parents) don’t, then someone else will.”

Being raised in a family where expectations are high has created in Leighton a young man who has excelled – and continues to excel — on several fronts.

In high school, he was a National Achievement Scholar, an honor reserved for just 4,700 or so of the 160,000 African-American students who annually compete for the prestigious award.

Lowell High School Principal Amy Pallo emphasized her respect for all the Watson children (Alon is a senior there now, and Pierce graduated a year ago), and characterized Leighton as a student “with a very high energy level who had great relationships with his peers” and was “a tremendously hard worker.”

Upon graduating Lowell High with a high GPA and test scores, Leighton qualified for substantial scholarships at the University of Notre Dame, University of Chicago, Princeton and Michigan State University. 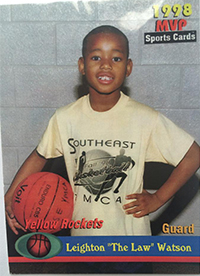 But he picked Howard, which lured him with a four-year academic scholarship, and a long-standing reputation since 1867 as a university with historical ties to American history and the Civil Rights Movement.

He’s embraced his education, but his social compass is also woven from the example set by what Leighton calls “a long line of leadership with the men in my family.”

Leighton’s paternal grandfather, the late Alonzo Watson, pioneered an innovative program in South Bend, Ind., that provided people on public housing the opportunity to secure educational opportunities and jobs that provided income enough to eventually own their own home and wean themselves off assistance.

Leighton’s own father’s influence isn’t lost on him, either. “My dad instilled morals in us,” he says, and he immediately quotes from Galatians 5:22-23, which trots out “the fruit of the spirit” in the form of “love, joy, peace, patience,, kindness, goodness, faithfulness, gentleness and self-control.”

And he’s quick to point out that his mother, Tina, served as the sort of Sunday school teacher who’s lessons extended from the classroom into every integral part of their family’s lives. 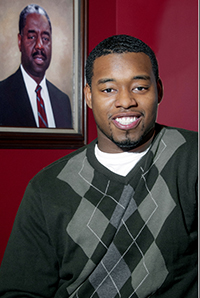 That life is what Leighton acknowledges as “a pretty sheltered upbringing,” which included attending schools in the Forest Hills district before transferring to Lowell his senior year.

Glenn left the GRPD some two decades ago, and leaned on his degree from Notre Dame in pre-med for the job he holds today in the pharmaceutical industry.

The family lives in a newly constructed lakefront home that boasts an indoor basketball court, and Leighton waves his arm about the home’s appointments and spaciousness to extoll its graces, saying humbly that “Why I was given this deck of cards?”  And then he goes on to quote Franklin D. Roosevelt, who came from a wealthy family, but prided himself on working for the common man.

Leighton sees himself in much the same manner – blessed to be attending on scholarship a historical black college where the costs surpass $40,000 a year – but willing to embrace the adage that “to whom much is given, much will be required.”

Toward that end, he works tireless in extracurricular ways, both socially and politically, in a constant quest for justice, equity, accountability.

He’s served his university as president of the Political Science Society, and vice-chair of the student senate. Off campus, he’s served internships with prestigious law firms, and in the office of Congresswoman Marcia Fudge (D-Ohio), chair of theCongressional Black Caucus.

He’s also worked in the White House Office of Presidential Correspondence, weighing how to respond to thousands of pieces of mail addressed to the executive office. 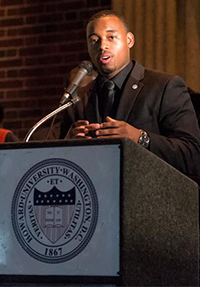 Through it all, he maintains a GPA of nearly 3.8 while pursuing degrees in English and Political Science.

Most recently, Leighton is involved with the presidential task force entrusted to explore policing policies.

He’s no stranger to argument and debate. In the words of his father, who says this with a smile, “In our family, if you’re not able to debate, if you can’t stay in the conversation, then you just stop talking, ‘cause we’re gonna burn you up.”

Leighton helped organize a bus trip of 50 students from HU to Ferguson, Missouri, in part to “get an understanding of what was really going on down there.

“I couldn’t rely on FOX or NBC or CNN. I wanted to go down there and see for myself, and at the same time, help with some voter registration.”

Not all his efforts revolve around unrest and civil rights. At HU, he was instrumental in putting hydration stations around campus that feature filtered water. He also helped institute a network of color printers allowing students to print documents from virtually any school site. And he’s involved in discussions about relaxing the rules regarding visitation in the dorms.

Quoting Martin Luther King, Leighton likes to ponder how “The arch of the moral universe is long, but it bends toward justice.”

He agrees, “but I submit that it doesn’t bend on its own. Blood, sweat, tears, protests, organizing, and strategizing have bent that arch, and those same efforts will have to be made now to continue to bend it towards justice.” 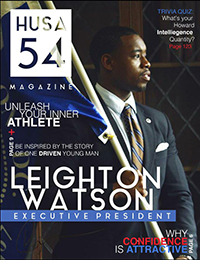