Thinking by Design, Solving Problems and Having Fun 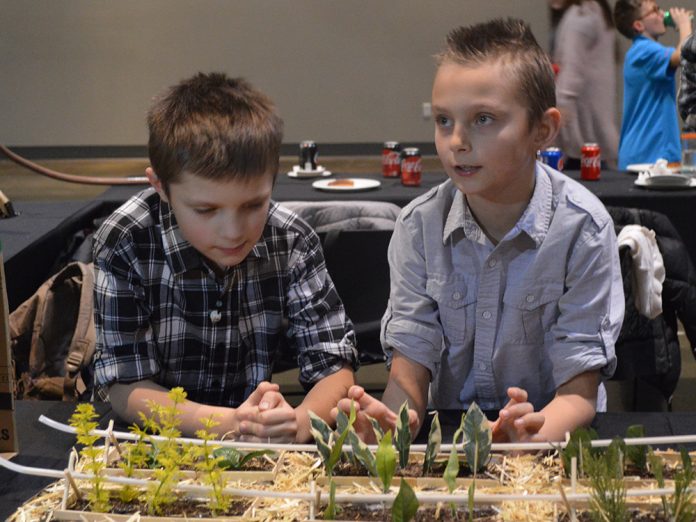 Want to know how to prevent accidents in the winter on major highways? Getting refugees without transportation to the Refugee Education Center in Kentwood? How to water your garden from rain water in a more efficient way than you are now?

Area students can help. Students from local schools designed their solutions to these problems typically handled by adults, and showed off their work at the first Design Thinking Showcase presented recently by the Kent ISD Career Readiness Team at Steelcase.

Design thinking is about imagination, throwing out wild ideas, not being afraid of failure and a process for reaching solutions, says Eric Kelliher, Kent ISD Career Readiness consultant. It’s where career education involves not just businesses but the community, and it’s being taught to teachers and students in multiple grades all over the Grand Rapids area.

At the Steelcase Town Hall, students set up their projects at tables and told visitors how they worked. Those exhibiting had won contests in which teams from their schools came up with ideas for solving a problem.

The winners were invited to the showcase, where teachers, assistants and more than 50 students showed their work to about 100 parents and business people. Each student was awarded a $100 gift certificate.

Making winter roads safer sounds like what state of Michigan engineers would solve, but an East Kentwood High School team didn’t let that intimidate them. They were students of physics teacher Laura Sloma, and had been studying the physics (like “Why didn’t the cars just stop?”) behind a 193-car pile-up in 2015 near Galesburg. Next they split into teams to create solutions to the problem, and were judged by three Michigan Department of Transportation engineers.

One of the team’s first ideas was to outfit cars like army tanks.

“You throw out every idea possible, even crazy ideas,” said team member Enrique Lopez, a junior. They moved on to the lights and poles idea, which would be much simpler and cost less. Research behind the final solution involved talking to an accident reconstructionist and people who had at least 10 years of driving experience on winter roads.

Just like in the real world, the work wasn’t easy. “You have to come up with things quickly,” said Lopez, admitting it was stressful.

“It really helped to be applying physics to something that had real-life application,” said Sloma, the physics teacher. “The design thinking process you can apply not only to problems like this, but other problems they’ll find in their careers. It was awesome thing to watch.”

A Shoe, a Dog and Keeping the World Cleaner

Zachary Reep rescued a Doc Marten shoe from being thrown away and his partner Sophia Senz picked up a tacky, chipped, ceramic dog planter at a thrift store. They planted herbs in these and other recycled items to show how “stuff” doesn’t have to be dumped in landfills.

“We can try to make a statement and say this stuff can be repurposed and doesn’t have to serve just one purpose it was made for,” said Zachary, a junior at Kent Innovation High School.

“It holds liquid,” Zachary said of the dog. “Why not? Plus, nobody’s going to want that dog.”

The students even made tea out of the herbs they planted.

“Rather than put the trash in the parks, we figured out how to put the parks in the trash,” said Zachary, who liked how the project connected to real life. “We wanted to show people they played a part in the environment. Everybody’s involved in it, and everyone can make a change.”

His favorite part of design thinking was the brainstorming and throwing out wild possibilities: “It was fun to find out what worked and didn’t work.”

One idea that didn’t make it to the drawing board was a portable garden on wheels. “It was unrealistic and had nothing to do with trash,” Zachary explained.

Thinking Behind the Showcase

The design thinking teacher training and contest were funded by grants from United Way and other businesses.

“It is thrilling to see students embrace Design Thinking models and processes,” said Deb Bailey, Director, Global Corporate Relations for Steelcase. “Years ago, Steelcase was a pioneering company in user centered design and design thinking.  It’s just amazing to see today’s students learning and embracing these techniques for innovation and collaboration.  We are very pleased to sponsor the Kent ISD and the student teams to showcase their semester projects.”

“This program met and exceeded our expectations,” said Kelliher, the career readiness consultant. “The teachers did a phenomenal job of embracing this program. It helped students see the connection between education and the real world with problem-solving and critical thinking.” He expects the event to be held again next year.

Crestwood Middle School took on the challenge of finding rides for refugees to the Refugee Education Center in Kentwood. “There are a high number of refugees at school,” said student Zyair Sims, standing by a model of the Creston area. Kentwood Public Schools has about 1,800 refugees and ELL students, who speak more than 60 languages and represent 90 countries.

The students’ first idea was to transport people to the center using Uber, but the cost was too high. Language arts teacher Lakesha Keuchler, coach of the seventh-grade team, says she saw the group’s “a-ha” moment when it decided to figure out how to bring the center to the people instead of the people to the center. Students asked community spots like the library, grocery stores and businesses to provide meeting places for users of the center, and those organizations agreed to do it.

Sand Lake Elementary fifth-graders from Tri-County Area Schools built a system last year to use rainwater from the roof of the administration building to water the school’s garden. This year, with design thinking, they took on how to get that water to the garden more efficiently than by watering it with a hose.

One of their goals was to create a system that didn’t use electricity. Students designed a system of PVC pipes with holes to run above the garden. Water collected from the roof went into 50-gallon barrels and was pumped into the garden.

The scope of building the assignment surprised student Mason Walkwitz. “I thought it was going to be a tiny school project,” he said. “We just started in class, then had competition at school, and now we’re at Steelcase.”

Redesigning Where We Work and Learn

If The Shoe Fits, Someone Designed It