The first week of middle school in East Grand Rapids looked a little different than in the past. Middle school students lined up in the media center carrying laptops and tablets of different sizes and styles, ready to equip them for use in the classroom. Technology Director Doug Jenkins helped set up Google Docs and passwords, sending students on their way to begin using the device’s educational tools.

Jenkins is setting the students up with their Engage 1:1 program, which involves each student having a laptop for studying and working with other students. Following a successful first year at East Grand Rapids High

School, the district has rolled it out at the middle school.

Assistant Principal Bill Behrendt said the focus is on using the devices to improve education and teach students to use them for reasons beyond social networking.  “Our students are engaged in technology. Why not take that and improve it?” he asked.

The Technology Day featured several back-to-back sessions with students to cover essentials: rules, expectations, online safety and digital footprints, setting the launch page and other programs. “This is like a shot in the arm at the beginning of the year to get them off and running,” Behrendt said.

While several local districts have embraced the 1:1 model of a laptop for each student, East’s program is unique because the district doesn’t fund the technology –  the vast majority of students use devices brought from home. If students don’t have a laptop, they can get one through the district’s scholarship program.

Administrators began exploring the idea of a 1:1 program in 2005 and since then have focused on how to use technology to improve the curriculum. Five pilot classrooms in grades 3-12 started in 2009, with seven more added in 2010. High school staff trained extensively in 2011 and 2012 to learn how to use these kinds of tools. The program may expand to third through fifth grades next year, depending on its success at the middle school and in elementary pilot classrooms. 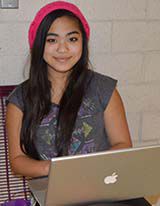 never could before.  “It’s breaking new ground,” he said. They can collaborate efficiently using Google Docs, or complete a geography project with Google Earth. “They are now able to do research anytime, anywhere,” Jenkins said

After a year of the program, seniors Sally Marsh and Max Gaegauf said they liked having their devices at hand, but were glad it didn’t take over the classroom. “Teachers haven’t overused it,” Max said.

They said the program has increased collaboration, and they like Google Docs and other programs.

“It was just easier to do things with technology. You didn’t have to go to the computer lab; you could just do it,” Sally said.