Wyoming Scouts Give Elementary Children a Nicer Place to Play 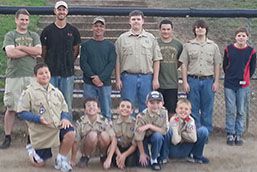 When West Elementary School moved into the former Newhall Middle School building, students inherited a schoolyard never used by children in kindergarten through fourthgrade. The building was vacant for a year after the middle school closed because of district consolidation. Landscaping was needed and the ball diamond needed repair.

The two Eagle Scout candidates took it on as their service project and led dozens of boys in cleaning things up, painting, landscaping and doing brickwork to make the schoolyard look 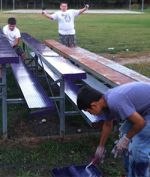 better and be a nicer place to play.

While administrators had shuttered Newhall Middle School during the district’s 2012 consolidation, they re-located West Elementary to the school this fall to alleviate overcrowded classrooms.

James’ project included leveling the school’s baseball diamond and repairing its fence and backstop. Scouts painted and relocated bleachers to the top of the hill beside the diamond for a better view and accessibility.  Also, in back of the school, they planted a natural barrier of trees, fixed fences surrounding the schoolyard, seeded a hill that had become a muddy reservoir from rain and installed a Wyoming Wolves sign.

“It looks a lot nicer than it did before,” said James, who has been involved in scouting for six years. He attended Newhall as a middle-school student.

Wyoming High School sophomore Nathan Davis, who also attended Newhall, brought engraving bricks from the old West Elementary to the new building site to prepare a brick bed. He and troop members removed benches from the front of the school and relocated them to the playground. They laid bricks and built a new mound with boulders, planted shrubbery and installed a howling wolf statue.

“I thought it would be a nice way to help at the school system I went to and help the community,” Nathan said.

West Elementary School Principal Michael Sturm said the scouts’ efforts are appreciated. The area is used for baseball, softball and soccer by Wyoming Middle School.  “It was a mess with weeds, broken bleachers and an ugly fence.  They made it very welcoming, clean and nice for families to enjoy a game,” he said.