Playing math games with your mom and dad might not sound like fun, but it packed the gym recently at Godfrey Elementary. About 250 students, parents and teachers crowded around tables as Calvin College students led them in games like Sweet 13, Sum What Dice, Pig and High Roller as part of Family Math Night.

A good time, yes, but also a valuable time for getting students interested in math and for future teachers to see how students learn.

Debbie Schuitema, Godfrey-Lee K-8 math coach, said many students look at math as something they just can’t do, and that research shows parents can have a big effect on why they think this way.  “If the mother is negative about math, and says it’s too hard, that can lead a child to say ‘I can’t do it either.’ It makes it OK to not be good with math,” she said.

The math night was aimed at building a different mindset, one where students think “if it’s

hard, I just haven’t learned it, but don’t give up just because it’s hard,” Schuitema said.  “They need to be flexible and believe they can grow their intelligence. We can all do it, it just might take more time for some people.”

Calvin College math professor Janice Koop, who has worked with the school before, helped plan the event with Schuitema. (Her work is helping students at Wyoming Public Schools too – see the Wyoming story here.)

Calvin students led games at tables spread around the gym. Elementary students could rotate from table to table, where simple items like dice and cards were used to play the games. If a student played three games, he or she got a raffle ticket to win prizes like T-shirts and gift certificates. They also were given instructions to the games they had played so they could play them again at home.

“That was our goal — getting things they could do at home to support math,” Schuitema said.

Third-grader George Reyes-Arriga played Sweet Thirteen with his father Jorge. “You can play with your dad,” he said grinning, when asked why he wanted to come to the event. As Dad smiled back, he added, “It makes it fun.”

Playing Sum What Dice were David Zamora and his children, first-grade Javier and kindergartner Adriana.  “They’re having fun, and they can learn more math,” Zamora said.

Calvin student Sara Conrad played The Factor Game with fourth-grader Mya Trabalka, explaining to her that figuring out what numbers go into other numbers would build the foundation for learning algebra.

Family Math Night wasn’t all about the elementary students. It also taught the college students how to teach better. The event was a class project for Koop’s math students, who developed the games and came to the school earlier in the day to teach them to students. 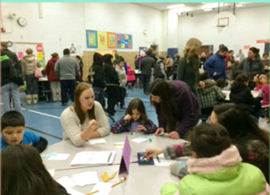 “It’s good for our students to be in the classrooms and learn what to do to adapt for different students,” Koop said. Future math nights are planned with the help of Grand Valley State students.