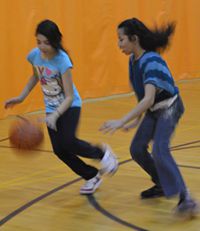 While breaking for water during intramural basketball practice, Southeast Kelloggsville Elementary fifth-grade student Camilla Casado said she was happy to have the chance to play ball with her friends after school.

“We get to actually be on a team and you can enjoy it with your friends,” she said. “It’s exercise, and you get some experience with basketball.”

Many students involved in the district’s newly restored fourth and fifth-grade elementary intramural sports program are playing on a team for the first time, developing a love for athletics and coming together as young Kelloggville Rockets, said Athletic Director Bruce Foster.

Cutting the $8,000 program, which initially started in 2000, was a big loss, and parents and students missed having the activities, Foster said. The main goal was always to give students something to do after school.

“We’re pretty happy it’s back. A lot of kids are happy. They are learning about a sport, it’s good for health and physical fitness and parents socialize while they watch their kids,” Foster said. “Anything you can do to bring the community together is a positive.”

It’s also a great way to prepare students for middle school and high school sports, “get them to become a Rocket,” he said.

“Hopefully they can find a sport they like, work hard and excel in it,” he said.

“I wanted to get fit and have something to do after school. I like how we are exercising and having fun,” she said.