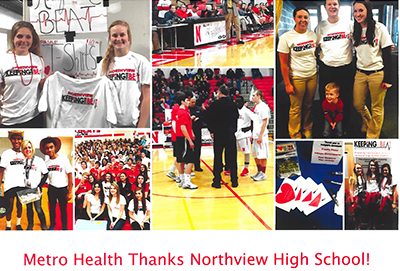 A student runs into the school, bends over and catches his breath. Then he gives his heart a tap and continues on his way.

So begins a lip-dub video produced by Northview High School students and staff to promote heart health in West Michigan. The playful montage of students lip-syncing to pop tunes kicked off a week of raising funds and awareness to support future heart screenings for high school students and their families.

The video was shown at an assembly featuring remarks by Ryan Klingler, former coach of Wes Leonard, the Fennville High School basketball star who died of a heart attack in 2011 after scoring the winning basket for his team. Metro Health began the screening program with the Wes Leonard Heart Foundation.

Northview and West Catholic high schools teamed with Metro Health to help prevent such tragedies with free heart screenings. Northview students raised funds by selling T-shirts and having a “change war” of loose coins. A physician spoke at the boys and girls varsity basketball games earlier this month.

The nearly eight-minute lip dub brought buzz to the effort by featuring about 30 lip-syncing singers and almost all of Northview High’s 1,178 students.  It was put together by the Student Council and National Honor Society plus a few faculty members.

“We’re trying to stop what happened to Wes Leonard, from happening to other kids,” said Austin Hendrick, student council president, who spearheaded the effort. “We wanted to portray the message while incorporating school spirit.”

Hendrick began planning the video over Christmas break after he and other students met with Metro Health staff. He and multi-media teacher Dave Tull plotted out the route through the school, tapped studentgroups to take part and students to sing each section.

Everyone from the band and winter sports teams to cheerleaders and the diversity club joined in. Assisted by students Katie Oomkes and Lucas Story, Hendrick and Tull conducted four practice runs before the big day. The original camera person had to back out at the last minute, but Spencer Schaefer gamely stepped in.

On the day of the shoot, students poured out of their classrooms and assumed their positions. As Tull carried a boom box playing the tunes “Safe and Sound” and “We Got the Beat,” students lined the hallways while the lip-sync performers slinked backward between them. Off camera, a couple of hundred students ran from the cafeteria to the auditorium for the final scene.

Along the way, the student who ran into the school, Kyle Rohen, is seen getting his heart checked and doing jumping jacks. In the final scene, he raises his arms triumphantly while students sing the school fight song, his heart strong.

“It was a learning process for everyone,” Austin said. “It was pretty crazy but it was a lot of fun.”