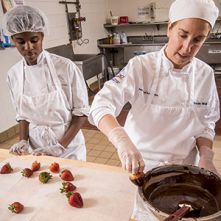 Let it be said here and now – OK, so written here and now – that the raspberry patch in my back yard cannot grow fast enough, and I have a diminutive warrior of a teaching chef to blame.

Her name is Sarah Waller, and her recipe for “Sarah’s Raspberry Bars” is keeping me up nights.

There are others she’s wresting from slumber as well – and that would include the hard-working students who answer to her every culinary whim at the Kent Career Tech Center, where Sarah arguably rules with an iron spatula.

“I was scared of her my first day here,” admits Alana Ankrum, 18, who’s enrolled in KCTC’s Hospitality program. “We’re talking a big voice in a small body. But you know what? She’s teaching me what I need to know. And she lets us know when we mess up, because we need to know how to fix it, and do better, and make it right.”

Indeed, “Make It Right” might be an apt mantra for this program, where 275 young men and women interested in hospitality as a possible career engage in hands-on activities that put them up to their elbows in everything from flour to frosting.

If Sarah’s perceived as being tough at times, it’s only because she’s persnickety about how food is made and served. “Anybody can make brownies from a mix,” she says. “But I want my students to know how to make everything from scratch. I need to keep things real.”

Her philosophy has morphed into recognition: The Greater Grand Rapids chapter of the American Culinary Federation named her Pastry Chef of the Year for the passion she brings to the kitchen, and for sharing what she knows with others. She was also honored recently for helping to develop the Tech Center restaurant as the first-ever “green restaurant” in Michigan. 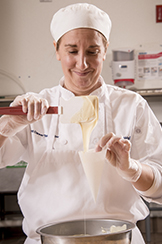 Her accolades and awards are feathers in the cap of the Tech Center, but it’s also the intrinsic gifts Sarah brings to her classroom that impress Principal John Kraus. “It’s not only inspiring to see what she can get students to do in producing these very ornate and complicated desserts,” he says, “but in how she relates to her craft, which is amazing.

“She’s also assumed some leadership roles as well, through her professional networks, that are benefiting many, many students in terms of what they hope to do next. And she’s very humble in doing it.

“She’s really great at what shedoes, and it’s easy to talk about great people who have passion.”

Sarah learned from among the best, beginning with instructors with the award-winning culinary program at Grand Rapids Community College, where she enrolled in 2001.

It’s there that she was tutored by, among others, Professor Gilles Renusson, a pastry chef well-known in his industry. “Every day, he was so hard on me,” she recalls. “I always knew the answers, and I was always on top of everything. But still it was like, “What do I have to do to get his approval?'”

To Sarah’s surprise, Renusson approached her one day on the eve of her graduation and asked, “What are you doing after school?” He point-blanked her with this: “I think you should go to work at the Ritz Carlton (Hotel) in Chicago.” 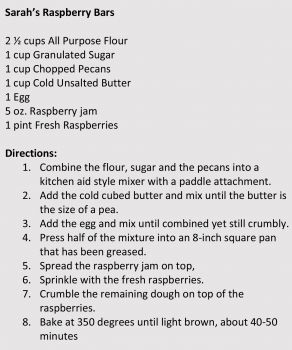 Five minutes later, Renusson was handing her a phone. On the other end was the pastry chef at the Ritz.

She stayed in the Windy City five years, turning out mouth-watering pastry while working shoulder-to shoulder with En-Ming Hsu, then captain of the World Cup Pastry Team that had just been awarded the Gold Medal during competition in France. While in Chicago, Sara also excelled at three other high-end operations –Giselle’s, Green Dolphin Street and the Azure Restaurant.

In 2005, she took a job at Egypt Valley Country Club in Ada, in part to return to near her roots. Though an “Army brat” who was born in Germany, she moved to West Michigan as a tot, and eventually graduated in 1991 from Cedar Springs High School.

She bounced around for a decade after high school from job to job, but none of them were kitchen-based.

She originally entered GRCC on something of a whim, thinking that if she learned more about cooking and baking, “I would have really nice parties.”

As part of a GRCC internship, she worked at Kent Country Club in northeast Grand Rapids, and while there, earned the opportunity to travel and study at the Marine Hotel overlooking the Royal Troon Golf Course in Scotland, which is part of the British Open venue.

Upon her arrival, she learned that a head chef had just left on vacation, and that his replacement would last but four hours. She was shocked when someone blurted out, “Who knows how to bake bread?”

Sarah raised her hand, and in the next moment, she was largely in charge.

She returned to finish out her classes at GRCC, which included an introduction to pastry. “I went back already loving it.”

It was while working at the country club that a fellow chef introduced her to the program at the Tech Center, and wondered if she’d ever thought about teaching. She was intrigued, and signed on in 2009.

Her first day was unlike anything she’d ever encountered: “There I am, standing in front of all these faces.  So overwhelming.” Sarah’s become well-armed. In addition to her professional experience that includes overseas venues, she’s earned a baccalaureate from Ferris State University, and by this summer will hold a master’s degree from FSU in Career and Technical Education.

But it’s being involved with students in the kitchen that excites her as much as any classroom. “I don’t see myself getting away from these kids,” she says. “They’re addictive, and a lot of fun.”

The feeling is reciprocal. “Amazing!” says student Ashlee Stormzand, when asked to describe Sarah. “Awesome,” adds Alana. And then the two of them lock eyes, and the words “strict” and “intimidating” come forth as well, followed by friendly laughs.

And while there’s plenty of fun in the culinary world, a serious side prevails.   “Burned, cut, bruised, scraped – you name it, we’ve all done it,” says student ChrisHite, as he sorts cheesecakes.  “People don’t realize how much work goes into this,” says another student, Cierra Pattison. 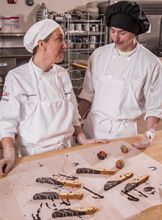 Nearby, Aisha Childrey nods. “Sometimes, it can be fun. But if during an evaluation, you fail, well, then you fail.”

At a large maple table, two students are trying their hand at scraping chilled chocolate from a pan, in an effort to create fans that will top dessert slices. Sara watches, then wades in: “Are you pressing hard enough? Are you scared of it?” The girls stop, then start again, this time with gusto. Voila! – their former blobs are now emerging as fans.

It’s a great lesson for Alana, who has just returned from shipping her resume to a local retirement community that’s advertised for kitchen help. With the expertise and confidence instilled by Sarah – as well as other chefs who lead and teach the Hospitality/Culinary Program – Alana and others feels as though she stands a chance of getting hired.

“They all have a passion for their field,” says Amy Miller, a paraprofessional for 12 years, speaking of the staff at large. “All of us just love the kids, and we want them to succeed. It’s why we’re here.”

Sarah concurs: “The kids are the most important thing.” 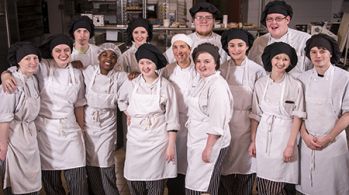 In a rare spare moment, I sit with Sarah and ask her to define a favorite pastry. She can’t. “I really like them all.” Then she says, “I really love to make ice cream,” and she acknowledges being partial to chocolate chip mint.

Then I wonder about her favorite meal – this culinary superstar who’s traveled the globe and seen and tasted it all.

I’m shocked by her answer, and then completely smitten with it.

“Grilled ham & cheese with pickles on the side,” says Sarah. “And chocolate milk.”