For Curious Third-Graders, Museum is the Perfect Classroom 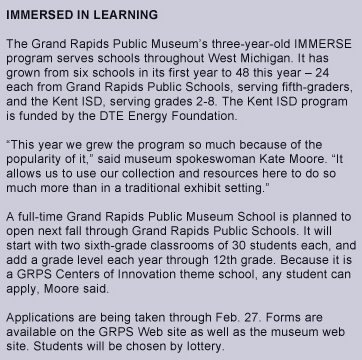 Megan McDonald gazed at a wide diorama of a Lake Michigan sand dune crawling with wildlife, and jotted this in her journal: “The job of the owl is to keep the rodent population in balance.”

Next to her, Alexis Clark took notes on a bird called the common flicker, while Jacob DeVries drew a sharp-shinned hawk. The Lowell third-graders were learning about their region’s abundance of creatures and plants in a learning-rich environment: the Grand Rapids Public Museum.

Twenty-six students from Murray Lake Elementary School spent a week studying the environment, economics and cultural history of West Michigan at the downtown museum. With the Grand River coursing by the museum’s airy galleries, students used its exhibits and artifacts as a classroom to learn how the area grew from a land of forests inhabited by Native Americans to the complex community of today.

The experience came courtesy of the public museum’s IMMERSE program, which this year is hosting 24 classrooms from Grand Rapids Public Schools and another 24 from Kent ISD schools (see “Immersed in Learning”).

For students like Megan McDonald, it was a chance to steep themselves in a place that before they had only visited.

“I like that you don’t just spend a couple hours,” Megan said. “You spend a whole week. You get to learn more stuff.”

Museum Makes it All Real

Learning more stuff was just what teacher Diane Titche had in mind for her third-grade class when she applied for the IMMERSE program.

“I thought, ‘This museum was built for our third-grade curriculum,’” said Titche, a 10-year teaching veteran. “The opportunity to be here and do this is amazing.”

“To be able to let them loose here, and explore their questions and go after their interests — it just makes it so real for the kids.”

>>The Museum School is targeted for a fall 2015 opening with 60 sixth graders with an additional grade level added each year up to the 12th grade.  Sixth, seventh and eighth grade classes will be housed at the Van Andel Museum Center, 272 Pearl St. NW, with the higher grades located at the old museum site, 54 Jefferson Ave. SE. (See related story on Museum School.) <<

The IMMERSE program offers a great use of the museum’s resources and benefits students with an alternative to traditional classrooms, said Kate Moore, vice president of marketing and public relations. “Museums are active learning environments for all ages, and this really brings that together,” Moore said.

Helped by a week’s professional training from museum and Grand Valley State University staff, Titche fashioned a unit on how communities grow and stay healthy. She hopes that by studying the history of Grand Rapids, its people and natural environment, students will better understand the ongoing development of their own community. She plans for students to identify a problem in the Lowell community, propose a solution and possibly present it to the City Council.

“This empowers them to take charge of their own learning and explore it,” she said. “They’re so excited, and they’re really learning.”

Students explored the museum’s archives and saw a custom-made program at the newly updated Roger B. Chaffee Planetarium. But they also had time for fun, such as searching for hidden elves and taking a daily whirl on the carousel.

From Native Americans to Old-School Toys 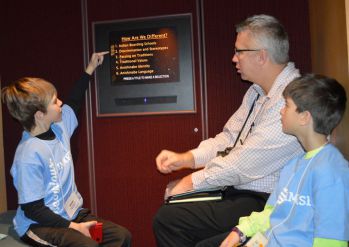 Midway through the week, Museum Director of Education Rob Schuitema greeted students warmly. “This is now your museum, isn’t it?” he said. “You kind of own this place.”

Accompanied by adult chaperones, students split into groups to see three exhibits: West Michigan habitats, for study of its environment; Streets of Old Grand Rapids, for its economic development; and The People of This Place, to learn about the original Anishinabek inhabitants and later streams of immigrants.

Nick Williams and Zach Kistler watched videos of Native Americans describing their experiences, including a woman who tearfully recalled when she became proud of her heritage. Afterward, Zach said Native Americans are treated “badly,” adding, “People think they’re different even though they aren’t.” “It’s only their skin color,” added Nick, who proudly said he is two percent Indian.

Other students gathered in a 19th-century facsimile of the former Herpolsheimer’s department store. Amid shelves full of fine china, spools of ribbon and Bissell carpet sweepers, students wrote down lists of artifacts and played with antique toys.

They talked about a hand-set printing press they had earlier observed, marveling that it took three hours to print each side of a bookmark. Air McFarland said it would be “really stressful” to operate, because if “you make even one mistake you have to start over.”

“Does it make you want to live back then?” Titche asked Elle Jenks, who replied uncertainly, “Sometimes, and sometimes not.” Titche pressed on, “What’s good about living now?” Elle’s answer was quick: “Computers.”