Editor’s note: Following is Katie Marentette’s letter to Leo Tolstoy, for which she won the state award for the Library of Congress Letters About Literature contest.

My dad adores bookstores. He could spend hours nursing a cup of coffee and a stack of books — not caring, just reading. He and my mom divorced when I was too young to remember, so my brother and I don’t see him often and when we do, visits are painfully short. Usually we stay in a cheap hotel chain, trying to lengthen a weekend that goes by too quickly. Often this leads down the road to a bookstore, and it is how I met “War and Peace.”

I can’t remember the name of the store, but Dad and I went while visiting family in Tennessee. I lost track of time running my fingers over the smooth paperback spines, marveling at the idea that every volume held a different world and a story I could enter without hesitation. Suddenly my fingers halted in a gap between the books, and I stumbled. I glanced at the space and realized it wasn’t a gap at all; it was a book, thick and heavy, shoved to the very back of its shelf; it was yours. I recognized the title and flipped through the first few pages of introductions and copyright, inhaling the “new book smell,” clean and crisp, that wafted from the pages. Soon, I was lost in your words (or rather, an English translation of them). Anna Pavlovna’s sharp tongue, Prince Vassily’s flamboyance, paired with complete incompetence, and the emphasis on language between the two struck me. On the very first page, I felt I understood your characters. 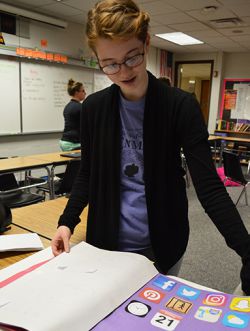 A Letter to Leo Wins Library of Congress Award

“Did you seriously pick up ‘War and Peace?'” I was lifted from my reverie as I turned to see my dad, grinning from ear to ear. I nodded, wide-eyed. He said he was proud of me. I was almost out of eighth grade that afternoon and, by the time I finished your book, was a quarter of the way through freshman year. When I began, I didn’t grasp the events and could barely keep track of the characters, but as difficult as it was, I enjoyed what I referred to as a “beautiful monstrosity of a novel.”

Leo, your book highlights the ability of people to change. Change was what I wanted back then, yet was also the very thing I feared. At the time I was reading “War and Peace,” I was struggling with discovering my identity and under pressure from the difficulty high school classes brought. I had fought to find coping methods for panic attacks and learn to love myself, but it felt impossible, and whether or not it was intentional, I found beauty in the irony of peace on a battlefield and war in a quiet family. Your characters were flawed, no doubt, but that was what made them beautiful; it made them real. I watched Natasha Romanov change from a naive, silly little girl to a charming young woman with true devotion to those she loved, and through all stages of that journey I saw myself in her.

Themes of “War and Peace” are life’s fluidity and the virtue of acceptance, yet the book itself taught me persistence. Anyone who knows me will agree that I am stubborn, sometimes painfully so, and in some ways I always have been. In other areas, I used to give up easily. My anxiety was crippling. Panic attacks were a frequent struggle, and the mere thought of crowded school hallways broke me into a sweat. People scared me. I’ve improved, because of you, but at the time it was the painful truth — and I hated admitting it.

When I was six, my brother was diagnosed with IPEX, a rare and deadly autoimmune disease. I was sent to live with my grandparents while he underwent chemotherapy and a bone marrow transplant. We’re told we are strong for getting through it, but in reality it damaged relationships and left my family permanently altered. Medical trauma gave my brother PTSD; separation gave me depression and a severe case of social anxiety. I never believed the people who claimed I was strong, because I felt weak and powerless in a world out to get me, and some days it felt so hopeless I could barely get out bed. I wanted to hurt myself. I wanted to disappear. I wanted to die.

Then I found “War and Peace.” Instead of crying myself to sleep, I read under the covers like a little kid, always thinking just one more chapter. I found myself laughing at the antics of the Rostov children and pitying the lost love between Prince Andrey and his wife, completely enthralled by your portrayal of a life so different from mine, yet somehow so relatable. In my brother, I saw little Petya, and my mother was similar to Marya Dmitrievna. Every twist and turn had me excited for more. I started telling myself, “If I can make it through this book, I can make it through today.” So I kept reading. And reading and reading and reading. Days turned into weeks, weeks turned into months, and before I knew it, I was at the last page.

From the beginning, the seemingly endless chapters had become a desperately needed source of comfort. When the story ended, I felt I had lost a small part of myself without it. I clung to the characters and their hardships, because I saw myself in their shoes, but at the end of the journey that was reading such a beautiful monstrosity of a novel, I had grown just as much as your characters. I changed from a petrified child to a courageous teenager, determined to overcome the fear that had crippled me for so long. I still have difficulty getting out of bed some days, crowds still turn me into a quivering mess, and panic still plagues me in my sleep, but instead of letting my misery consume me, I want to get better and refuse to give up.

The day I found “War and Peace,” my dad said he was proud of me. Today, I will not fail him, nor will I tomorrow. I have no doubt that if I could make it through your book, I can make it through every year left in my life. I wantto keep trying. I want to get better. I want to live my life to the fullest. And most of all, I want to keep making my dad proud.

The day I found “War and Peace,” I did not know how much it would change me. Today, I can say, without a doubt, that my anxiety will not destroy me; it may be strong, but so am I.

‘What Makes You Proud of America’