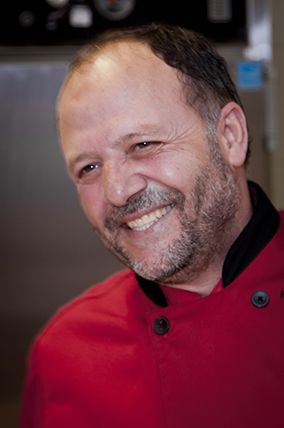 I am driving home from a morning spent taking notes about the stellar food service program at East Kentwood Public Schools, and you might think my thoughts are revolving around the delicious garbanzo bean salad I ate, or the incredible employees I met. How the counters and tabletops and floors were all spotless.

But no. My mind is focused on a little boy from war-torn West Bank. The year is 1967 and he is 8 and he and his family are fleeing the farm his parents had worked so hard to establish and maintain. In their wake, they are leaving land they scalped and disked with their bare hands. Animals who need tending. A hardscrabble life built by sinew and sweat. And now, some 45 years later, you think he’d be brimming with vengeance. At least harboring some residual remorse. Too sad to move on, stuck in time as a refugee entering Jordan alongside his parents and his eight brothers and six sisters.

Instead, Mo Shamali leaves it all in a very small rear-view mirror. There is too much to do for others, in his role now as Child Nutrition Director for Kentwood Schools.

His job, simply put, is for him and his staff to create and serve upwards of 12,000 meals every weekday.

But behind every bite of bread and mug of milk, love lives.

He brings his left hand to his heart. “Here is my life, improving continually by investing in the children,” he says. “In the cafeteria, on the soccer field. Everywhere you go, our future is our children.

Young Chef with a Heart for Serving

Thirty-two years ago, he was a young chef just starting out at the newly christened Amway Grand Plaza Hotel.

Just three years prior to that, in 1978, he was arriving in the U.S. with virtually no English language skills. He knew what he wanted, though: to prepare and serve fine food, and he made his way to what then was Grand Rapids Junior College, where its culinary program was still in a fledgling stage.

He specialized in international cuisine, though more important than what he prepared was always the person ingesting it.

That philosophy of service found its way into his blood at a young age, as he watched his parents open their humble farm up to anyone in need.

“I would see them giving their gifts, making food. So it has always been about giving, not receiving. In my faith, what you own doesn’t belong to you. God has given it to us, and we will be asked one day, ‘How did you use my gifts?’”

As a practicing Muslim, he takes time out of his day fully five times to pray, facing the northeast and lying prostrate to humble himself before a higher power.

Before retiring each night beside his wife of 34 years, Susan, he stops to consider how wisely he used the previous day. Softly, he whispers to himself, “Did I treat people fairly?”

He smiles faintly. “I do that. I have to. Because the good Lord will ask me that, too.”

His reflections of the past, however, are only designed to help him move forward, and that is why he has no hard feelings about being displaced as a youngster.

“I have no bad taste,” he says. “If it hadn’t happened, I wouldn’t be here,” and he waves his arm as if to embrace the epicurean kingdom that has delivered him – a school campus teeming with youth akimbo.

“Acts of God,” he says. “Everything happens for a purpose.”

And yet, acknowledging a supreme being doesn’t mean you wait in repose until a still, small voice summons.    “You need to seek your life,” Chef Mo says. “You have to seek.”

It is a word he wishes more young people would put into practice. Instead, he sees too many tethered to electronic screens, and simultaneously wondering why they can’t figure out what they want, where they belong.

Get up, he says. Wander other worlds. Explore.

Chef Mo believes learning never stops, and a check of his bookshelf reveals that to be true. It’s where you’ll find juicy titles like “Serving It Safe” and “Breakfast Lunch Training” and “Healthy Cuisine for Kids.”

Suddenly, we are standing in the cafeteria that serves the high school’s East Wing. It’s one of 27 sites where food will be presented this day, not only throughout the Kentwood system, but in next-door Kelloggsville, where Chef Mo oversees the distribution of 3,000 meals daily.

Inside Kentwood, he beams with pride to reveal vending machines that, instead of tempting with candy, offer fruit and other healthy alternatives.

In the kitchen that has sprung to a double-time clip, you will find likewise. “I don’t use cans,” he says. “I eliminated them eight years ago. Only fresh or frozen. I want the nutrients to be the best.”

Students stream in. In seven minutes or so, all 200 will have been served.  The eats are delightfully deceiving. The Jell-O isn’t Jell-O at all, but 100 percent fruit juice.

That garbanzo bean salad I had two helpings of, contains freshly chopped cilantro. The salad bar boasts no fewer than 21 toppings. The soups are potato and lentil. 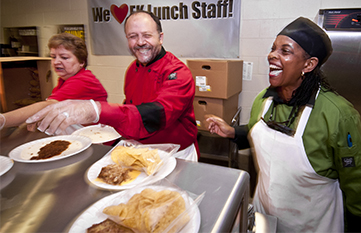 The pizzas and subs are 51 percent whole-grain, and come bare-bones; you choose how to scaffold the extra ingredients.

Bukelwa Hornsby is the food service worker in charge of East Wing. She is constantly asking, “What do you need, how can I help, can I get you this or that?”

Michelle Waber is checking kids through a line, but all the while it’s How is your day going so far and what’s new and that looks like a great salad.

Johnathan Rohne is one of just two males working here. He graduated from East Kentwood last year. “We know Mo’s standards and we live up to ‘em.” 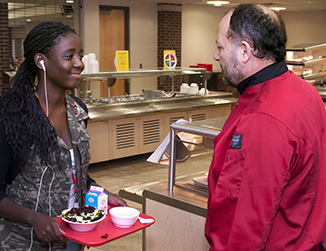 John Keenoy is the high school principal. “Mo’s the best,” he says. “And what I mean by that is, Mo is focused on what the students’ needs are. His staff interacts with the kids. They know a lot of their names.”

How deeply is the food staff invested in students? Kennoy recalls from a couple of years ago when seniors – who are annually encouraged to choose a staff person to speak at graduation – selected food service employee Cathy Linder. In essence, a lunch lady.

I am still slurping soup and feasting on salad when Chef Mo excuses himself. Tonight’s big, because up to 1,000 parents will be visiting the high school to sample food being brought in from Gordon Food Service and its vendors.

Very quietly, Bukelwa Hornsby – the lady in charge, mind you – is sweeping up food scraps from the cafeteria floor.

So much for a caste system. For a pecking order

Because they have been taught by a humble chef that when you are seeking on behalf of kids, there is no time to celebrate your title.

Superintendent Michael Zoerhoff adds “Mo has a huge passion for helping children.  Even though he isn’t directly in the classroom, he plays a major role on our Kentwood Team by making sure students have nutritious and delicious meals every day.   Mo strongly believes having a healthy, nutritious meal allows students to be the best they can be in the classroom.”